Minutes after U.S. president Donald Trump concluded his Tuesday night speech, Vermont Senator Bernie Sanders recorded a 14-minute long video, criticizing Trump for not just what he said but also what he didn't say. In a video posted to Facebook,... 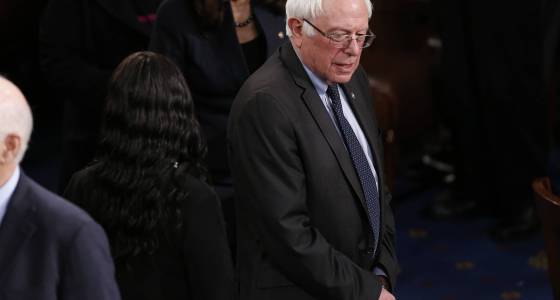 Minutes after U.S. president Donald Trump concluded his Tuesday night speech, Vermont Senator Bernie Sanders recorded a 14-minute long video, criticizing Trump for not just what he said but also what he didn't say. In a video posted to Facebook, Bernie Sanders attacked Trump's first speech before Congress, in a point-by-point takedown that called for continued resistance against the new administration.

"Those of you who attended rallies or town hall meetings: Keep showing up, keep calling Congress, and continue to fight," the senator said in the live stream. "If you haven't taken action yet, we need your voice. Only together when millions of people stand up for economic justice, for social justice, for racial justice, for environmental justice, only then can we create a political revolution that will turn this country around."

Sanders was unimpressed that Trump never mentioned climate change, justice reform, and the Supreme Court's "Citizens United" ruling. He reminded the country that Trump didn’t say one word about making colleges more affordable and addressing the crisis of student debt.

Trump's brief reference to "clean" intitiaves was "laughable", according to Sanders.

"When Donald Trump said we need to promote clean air and clean water…I had a difficult time not laughing out loud," Sanders said. "Because on this very, very day he signed an executive order rolling back President Obama's clean water rules and has appointed the most anti-environmental EPA administrator in our nation's history."

Sanders also slammed Trump for not addressing the issue of the crushing burden of student debt in America, and questioned the need for adding more resources to the Pentagon budget when there are thousands of students in the country who couldn't afford college education.

"Do we add 80 plus billion dollars to the Pentagon or do we allow every qualified young American the ability to go to college tuition free?" he asked. "I think the choice is clear: I think we do not need to greatly increase Pentagon spending."

He went on to criticize Trump for lying about the U.S. having the highest corporate tax rate in the world, and expressed his dissatisfaction over the president's pledge to repeal and replace the Affordable Care Act, also known as Obamacare.

“Tonight, President Trump once again made it clear he plans on working with Republicans in Congress who want to repeal the Affordable Care Act, throw 20 million Americans off of health insurance, privatize Medicare, make massive cuts in Medicaid, raise the cost of prescription drugs to seniors, eliminate funding for Planned Parenthood, while at the same time, he wants to give another massive tax break to the wealthiest americans,” Sanders said.

Sanders also talked about the issues that he said Trump doesn't want the American people to know, and urged Americans affected by the health care act to “keep showing up, keep calling Congress and continue the fight. The Republicans are now on the defensive, and we have to continue to push them back.”