V-rapporteur: My party needs to wake

Left needs to wake up, when it comes to the climate. this is the sound of the reprimand from one of the Liberal party's own mps, indfødsretsordfører Morten D 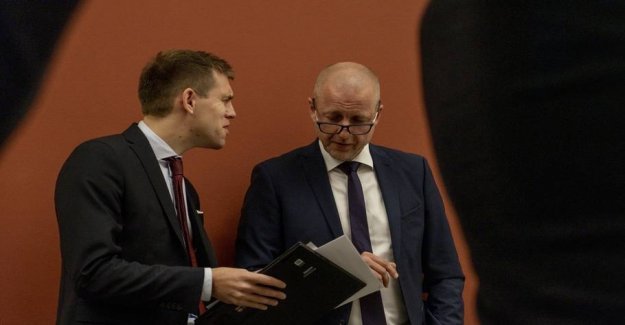 Left needs to wake up, when it comes to the climate.

this is the sound of the reprimand from one of the Liberal party's own mps, indfødsretsordfører Morten Dahlin, in an op-ed in Politiken.

the Post is brought immediately after the Party's former vice-president Kristian Jensen in the weekend smoke on ass and elbows, because he publicly called on his party to make long-term reforms with the Social democrats and The Radicals.

Something that not just can be said to belong to the kernestoffet in Kristian Jensen's former duties as rapporteur for the Arctic. And it also got the party's leadership, with president Jacob Ellemann-Jensen in the tip to feel underløbet.

The ublide ride to Kristian Jensen, however, has not deterred indfødsretsordfører Dahlin from throwing themselves into the climate-the fight - on top of that with a wish that his party "wakes up":

'If you pull it a little bit hard up, it has previously worked, as on the Left sometimes has had to be dragged to the climate trough', writes Morten Dahlin among others, and continues:

'just look at the 70-percent target (for reduction of CO2 in 2030, ed.). Left was the last big party that declared its support for the goal'.

exactly the objective of the reluctance of president Jacob Ellemann-Jensen, a transition to the join, before he suddenly saddled by the Danish parliament's opening.

a Few weeks before he was clear and right that The Conservatives had 'bought a pig in a poke', as they as the first batch wrote under the 70 percent.

But it is in no way a criticism of the Ellemann, underlines Morten Dahlin opposite Ekstra Bladet:

- If the Left was not quite awake, when you hesitated to support the 70% target, as was Ellemann it is well not to begin with?

- I think that Jakob Ellemann is a quite exceptional exponent of what the Left stands for, namely that you can be both blue and green, and it was he also, as the minister, he says.

Ellemann has all the time maintained that both are able to afford to spend more money on welfare and save the climate.

nevertheless, writes Morten Dahlin in his speech, that we at some point will need to prioritize' between welfare and climate:

'At some point, we have to prioritize: we Will have increased public spending, or will we invest in a greener future? And I mean clearly, we need to prioritize the climate', he writes.

But Morten Dahlin rejects, nevertheless, that he is at odds with his president:

- it Is Liberal party policy, that if you only have a penny, then it must go to the climate rather than more public spending?

- It is Liberal party policy, and as I'm trying to put words in my post, is that when we have remunerated the demographic, so there is some money back, as we are ready to use some of the green area.

- It is also the reverse of what you are writing. You write "climate first", now you say it's "welfare first".

- What is the Liberal party policy is that we will honour the demographic (related to more children and the elderly, ed.). It is the policy of my post stands on the shoulders of. And I say so, that some of the money back, the ones we will use on the green transition.

It has not been possible to get an interview with the Liberal party's political rapporteur, Sophie Løhde.

But she writes in a text message that she had not read Dahlins post.