Three protesters are shot and killed during the turmoil in Iraq

Three protesters have been shot and killed in the night in Iraq. This was stated by the head of the forensic department in the holy city of Karbala, where the 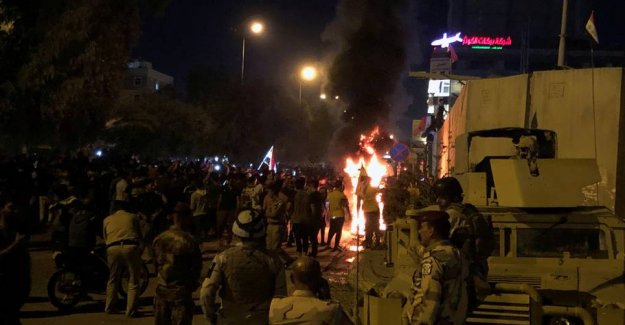 Three protesters have been shot and killed in the night in Iraq.

This was stated by the head of the forensic department in the holy city of Karbala, where the three were killed, on Monday.

security Forces fired shots directly at demonstrators, who among other things tried to climb over a wall into the iranian consulate in the city.

Over 250 people have lost their lives since protests against the government broke out in the country the 1. October. It informs AFP news agency. The iraqi authorities have stopped publishing the official death toll.

Late on Sunday in Karbala hung demonstrators iraqi flag up at the iranian consulate in the city. At the same time spraymalede the "Karbala is free, the Iran out, out!" on the walls near the consulate, reports the AFP.

Others threw stones or fired fireworks over the konsulatets walls. There was also a drive in the fires, shows the images from the site.

as the protests developed, was fired the shot.

- They do not shoot up in the air. Their purpose is to kill - not to dissolve the demonstrations, says a young protester wearing a mask for the mouth.

- They protect the iranian embassy, and we just want a free country. Why they kill their own countrymen for a different country?

Iraq has a close and complicated ties to neighboring Iran.

The two countries fought in the 1980s in a bloody war. Today, Iran has a significant political and economic influence in Iraq.

Each year raises millions of iranian pilgrims to the holy city of Karbala in Iraq. It is located about 100 kilometers south of the Iraqi capital, Baghdad.

Many iraqis have during the past month's protests accused Iran of being the primary support of a corrupt and inefficient system in Iraq.