The prime minister will find common ground for nature

Prime minister Mette Frederiksen (S) spoke Monday to a large number of organisations and politicians, who at Marienborg is met up to discuss how to strengthen n 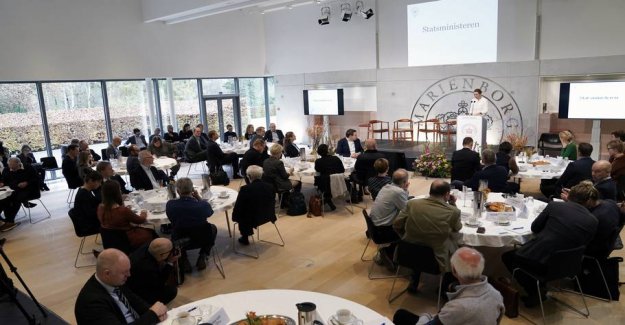 Prime minister Mette Frederiksen (S) spoke Monday to a large number of organisations and politicians, who at Marienborg is met up to discuss how to strengthen nature and biodiversity in Denmark.

Who were invited both to the action and compromises - and remembered the days of old from the prime minister's hand - over of participants, ranging from the Danish Occupation of the Danish society of nature conservation to the Association for Safe Inshore.

- Children have an instinctive joy in nature and understand that it is important to take care of. Adults tend to forget it.

- In my own school I was very engaged. I was active in the animals dosed Guard and the world wildlife fund. And my pocket money went to the sperm whale, Jens and support to plant rainforest, the prime minister said.

- Long I refused to use makeup, deodorant and toothpaste, because it was tested on animals. The fight about the toothpaste won my mother however.

She also mentioned Sneleopardklubben, a club she started to the support for endangered animals, not cuddly.

Mette Frederiksen continued to stress that the situation is serious. Biodiversity decreases rapidly, and more and more species are threatened or disappear completely.

But the prime minister also called on the participants in the debate on nature and biodiversity to meet each other.

And she said that Denmark is an agricultural country, and that it is a fact, she loves and believes is necessary.

- We must remember that it is not doing anything to have some facts in the discussion. If it becomes too hot-headed and polarized, then you lose the nature. Therefore, we must use our strong tradition of finding compromises and solutions.

- But there must not be doubt, that I stand on nature's side. And we got in June a historic strong mandate for political action in this area, said Mette Frederiksen.

the Prime minister called again to find balance and compromise. Also, when it comes to, that ordinary people should have access to nature.

- I am basically an optimist - still. But one of the areas where I can be in doubt, is on nature's behalf. For it goes so fast, and it takes a long time to correct.

- It will be difficult but now we are in time, said Mette Frederiksen.

the Unity environment and klimaordfører, Mai Villadsen, says, that 'there is no doubt that there are many farmers who would like to nature it is good'.

- Our challenge in Denmark is that we have the patch almost the whole of our earth with the agricultural area. We will have to change.

- So there must be a smaller area in Denmark, which goes to agriculture. It will be good for both nature and the climate, she says.

Unity has in its naturplan among other things proposed that there should be 35 naturnationalparker, and that 25 percent of the land area and 25 percent of the maritime area in Denmark must be appointed as a naturzone.