The crown prince moves to Greenland

crown Prince Frederik kickstarter the royal fun run, Royal Run, when he was 28. may wear the shoes in the greenlandic capital, Nuuk. It informs the royal fami 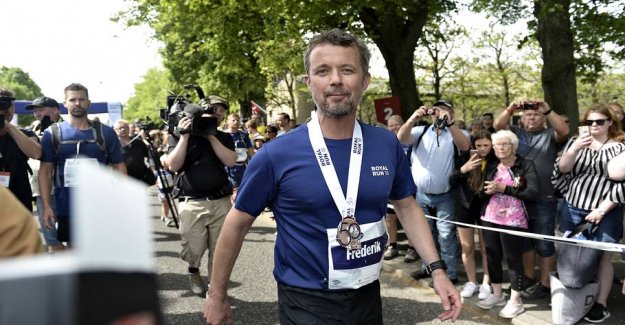 crown Prince Frederik kickstarter the royal fun run, Royal Run, when he was 28. may wear the shoes in the greenlandic capital, Nuuk.

the Royal Run will take place for the third time. Last year started the crown prince of the Faroe islands, and this year is the tour so come for the greenland part of the Danish realm. The race kicks off officially in time 2. the day of pentecost - 1. June - in Sønderborg.

this is The first time, the race begins in Sønderborg, and it happens in occasion of 100-anniversary of the Reunification.

After the first stage in Sønderborg will the crown prince take the trip to Aalborg, before he continues in Odense. On the island of Bornholm will the race - like last year - be held outside the crown prince's participation. The end is in similarity with the previous two years the crown prince's ten kilometer race in Copenhagen and at Frederiksberg.

See also: Minister must explain to the Defence and the meetings with the crown prince

the Danish crown prince's children are wont to be good to cheer from the sidelines. Photo: Jonas Olufson.

the crown prince got the idea for the Royal Run for two years ago, when he reached the age of 50 years.

The first year was a 70,000 participants, and last year, 82,000 people were enrolled in Royal Run in Copenhagen, Aarhus, Aalborg and Bornholm.

the crown Prince's own participation, last year was hampered by a herniated disc. He went with the short route of 1.6 km in Aarhus, while crown princess Mary ran five kilometres in Aalborg.

Royal Run is organised in a cooperation between the Danish sports associations, DGI) and the Danish Athletics Federation. Last year was one-third of those persons who have not previously race.

- We can see that 28 percent of participants in a jogging for the first time. It is very satisfactory, said the director of the Søren Brixen from the DGI time to Ritzau.