Naked Danish Julie the protagonist of the scandal: Director fired

A naked woman's body on a display is normally quite dangerous, but not in Kyrgyzstan. In the small country squeezed in between China and Russia has Danish Ju 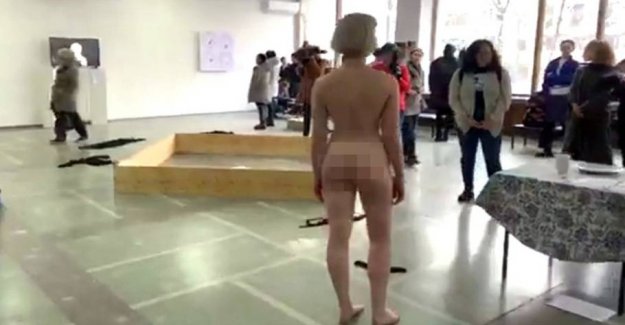 A naked woman's body on a display is normally quite dangerous, but not in Kyrgyzstan.

In the small country squeezed in between China and Russia has Danish Julie Savery naked body created trouble, and now the minister has also gone into the matter.

It all started on the 1st Feminnale of Contemporary Art in the country's capital, Bishkek.

Here had the organizers chosen to Julie Savery to appear naked in order to put the focus on women's lack of rights in the country, and especially sexarbejderes poor conditions.

It writes the Kyrgyz news agency AKIpress, describing the whole affair as a scandal.


But the dane's track 'reverse striptease' created great anger among the audience, like the nationalist activists demonstrated and demanded the exhibition be closed.

They believed that the artistic message was distorting young people's views on the kyrgyz culture.

- the Exhibition promotes marriage between two persons of the same sex. We believe that it is contrary to the constitution, and we need to check whether there were minors present. In such a case, it will be considered as pornographic propaganda, says activist Aybek Busurmankulov for the BBC in Russia.

You can see the picture that started the fuss, here.

It was subsequently minister of culture, Azamat Zhamankulov, to go into the matter, and he chose to fire the director of the Kyrgyz National Museum of Fine Arts, Mira Dzhangaracheva, on the spot.

even if the organizers have told that Mira Dzhangaracheva did not know that there would be a naked woman in the exhibition.

- Under the feminism flag was held acts with a naked woman in parliament and in the church. Also in the museum there was a provocation, said the minister of the naked women.


And so developed the ballad itself.

the Woman behind the exhibition, Altyn Kapalova, has subsequently made several postings on Facebook, where she chastises the government in Kyrgyzstan.

'I beg international human rights organizations and the UN to intervene. A bunch of men, who openly called for the killing and punish me can not dictate to our country's values. Why provide the ministry with them a playground?', she writes, among other things.

Julie Savery appearance at the art exhibition is now changed out with a sign, which just says 'censored'.

Ekstra Bladet has tried in vain to get a comment from Julie Savery. She is the daughter of Uffe Savery, who are best known for being one half of the Safri Duo. Today he is rector of The Royal Danish Academy of music.