Rolling Stones frontman Mick jagger's beautiful daughter, the 28-year-old Georgia May Jagger has more than 10 years working as a popular model for the big fash 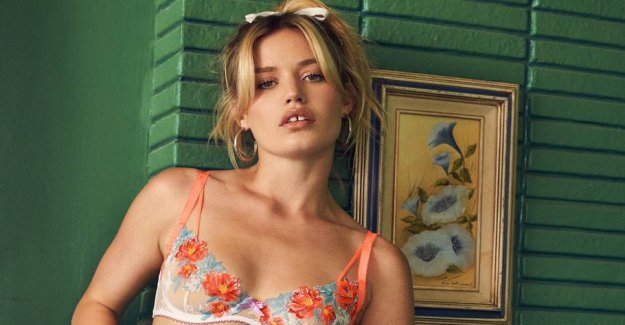 Rolling Stones frontman Mick jagger's beautiful daughter, the 28-year-old Georgia May Jagger has more than 10 years working as a popular model for the big fashion giants such as Chanel, Balmain, Versace, Louis Vuitton and Tommy Hilfiger. But now she takes the plunge into a more colourful direction as an underwear model for Victoria's Secret.

It writes multiple media including the Daily Mail and the Mirror

'Victoria's Secret - For Love and Lemons'

A spread shared by Georgia May Jagger (@georgiamayjagger) the

Georgia May Jagger has star genes from his famous father Mick Jagger, and his world-famous mother Jerry Hall, who is also former for many years was one of the world's most popular models. Mick Jagger and Jerry Hall were married from 1990 to 1999 and had four children together.

In another image from the beautiful series of photographs, you can see Georgia May dressed in black lingerie, while she is sitting on a bed with a yellow quilt. And in the background you can see a yellow wallpaper was embellished to add flowers.

On a third image is that of Georgia May wear something yellow transparent lingerie.

According to fashion magazine Vogue moved Georgia May Jagger from London to New York last summer, because she wanted to spend time with her boyfriend Louis Levy, who has a restaurant in New York city.

Nothing, however, suggest that she will be in New York city. She has plans to open a beauty salon in Los Angeles similar to the one she already has in London. And finally, Georgia May Jagger plans to start his very own collection of skin products in the spring of 2020.