Big drama: Trapped 250 meters above the ground in eight hours

An austrian BASE jumper' hung on a wall of rock in eight hours, 250 feet above the ground, before they managed a rescue team to get him brought down safely. 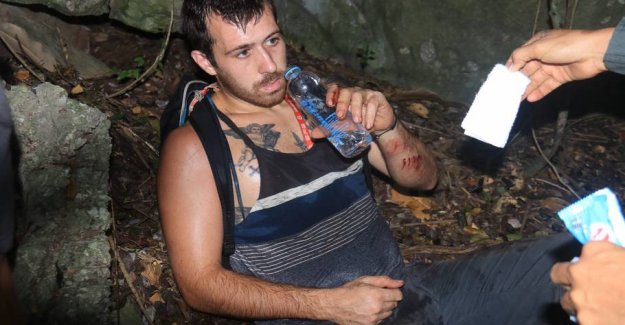 An austrian BASE jumper' hung on a wall of rock in eight hours, 250 feet above the ground, before they managed a rescue team to get him brought down safely.

Saturday had John Glatzer participated in a faldskærmsshow along with nine others on the 'National Children's Day' in Thailand, but the austrian had the courage and decided to repeat the plunge on Monday 13. January.

Here it went totally wrong when he jumped at the Khao Ok Thalu in Phattalung, when his parachute got stuck on a rock on the mountain.

the BASE jumper was 250 feet above the ground and had not much to support him, while he was trapped on the mountainside. Yet he managed to be standing for eight hours, until he was rescued.

this is where Glatzer stuck on the rock wall. Photo: Freedom Team Drone

Redningsholdet first tried to rescue him with a helicopter, but failed due to lack of space on the cliffside.

instead, he was at half past four in the morning local time saved, because you sent men down with ropes, which bound John Glatzer real, then he could fire down from the mountain.

'BASE jumping', which is being considered as an extreme sports, go out to throw out from fixed objects with a parachute or a wingsuit. The parachute will first be folded out, while the knight is in time with its fall.

Glatzer suffered less damage to his knee and was subsequently taken to Phattalung Hospital. It was a local, who discovered him on the cliff side and called for help.