part of the two million danes, who followed the queen's new year speech from the modtagelsesværelset in Christian IX's mansion at Amalienborg palace in Copenh 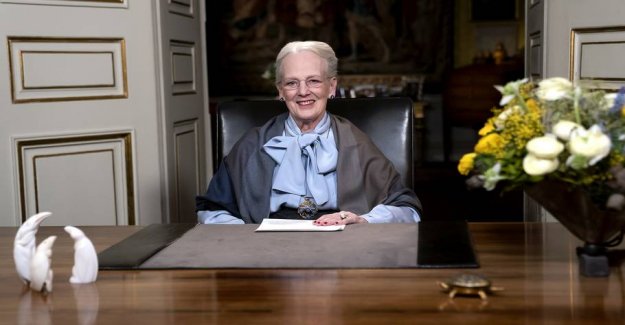 part of the two million danes, who followed the queen's new year speech from the modtagelsesværelset in Christian IX's mansion at Amalienborg palace in Copenhagen, hoping for a surprise, as in ’15, as she indicated, Prince Henrik went on pension.

But they were disappointed.

the King spoke in his 48. talk in the 11 minutes a little bit of everything.

- It was an absolutely ubemærkelsesværdig and entirely conventional in the new year. It lacked edge, believes Sebastian Olden-Jørgensen, associate professor of Danish history at Copenhagen University.

She remsede up on anniversaries; 80 years of the 9. april, moon landings, then it is universally human about loneliness and the climate crisis. Then some findings that anti-semitism is an ugly thing. Which there can be no disagreement, he says.

Then she takes the usual turn around in the Kingdom: A nice nod to southern denmark, Greenland, the Faroe islands, danes abroad, the deployed soldiers and the danes in the work of the new year's eve. It was neatly and properly, he says.

People who got bored, could, in turn, are comforted, that it was quickly over.

She spoke in barely 11 minutes - in writing-it 6802 characters. It is 1849 strokes fewer than the previous four years, where the speech was on average at 8651,5 the stop.

As usual, could schadenfreude types along the way to entertain a little with the fact that the minister stumbled in the words, while others might smile to queen in the degree was snottet and nasal therefore repeatedly plastered nose for the open screen.

The only thing seriously remarkable about the speech was, however, according to Sebastian Olden-Jørgensen, and that the queen only to a very modest extent, talked about the very big event, Denmark marks the centenary of the reunification with southern Jutland.

- There is talk about a very important event for Denmark and the royal family. The queen still remembers his grandfather, King Christian X, the 10. July 1920 on his white horse crossed the Kongeågrænse at Frederikshøj, and thereby marked, that Jutland once again is Danish. The queen was seven years old when he died. In this light, it was surprising that she didn't really themed this very important historic event.