Jasmine Mousseau has spent months trying to understand why her children’s school is on the chopping block.She’s read reports prepared by the York Catholic School Board, crunched the numbers and talked to anyone willing to listen to her case... 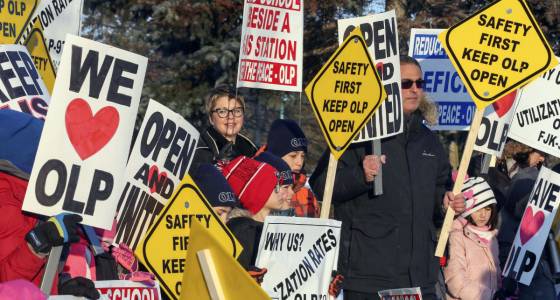 Jasmine Mousseau has spent months trying to understand why her children’s school is on the chopping block.

She’s read reports prepared by the York Catholic School Board, crunched the numbers and talked to anyone willing to listen to her case for why Our Lady of Peace in Vaughan should stay open.

In her view, the facts speak for themselves; the school has 97 per cent enrollment, offers the only French immersion program in the area and has had among the highest EQAO scores in the city, says Mousseau.

But, more importantly, she says, closing down the school will divide the close-knit community in the heart of old Maple into two.

“We are one community,” said Mousseau, who moved into the area five years ago just so her kids could go to the school. She has one child in English and another in French.

“We assemble together, we pray together and, after school, all the kids play together,” she said. “It’s sad, because we are being carved up along linguistic lines.”

On Tuesday, Mousseau’s family and hundreds of others will learn the fate of their school, when York Catholic trustees vote to endorse a staff recommendation to shutter the school.

The 272 students in the English stream would be sent to Father John Kelly, which sits on busy Keele St., and the 191 French students would merge with Blessed Trinity, a school some two kilometres west.

Our Lady of Peace would close in June.

The real reason for closing the school is balancing the books, the board says.

Under pressure to deal with schools the provincial government considers “under-utilized,” school boards across Ontario have been ordered to conduct “pupil-accommodation reviews” to reduce half-empty schools.

York Catholic Board’s need to do so has been even more necessary, due to a “non-compliant budget,” in which the board’s deficit is more than one per cent of its operating revenue, according to the board.

“YCDSB has seen an increase in the number of surplus (unfunded) pupil places over the last decade as enrolment has declined,” said Sonia Gallo, a spokeswoman for the board. She added that there are 6,000 surplus spots in the board.

“As of October 2015, the shortfall in funding to heat, clean and maintain classrooms in York Catholic is just over $5.5 million. If surplus capacity is not addressed by 2020, this shortfall is estimated to grow to over $7 million,” said Gallo, who added that the ministry of education is helping the board create a plan to curb the trend.

As a result, the YCDSB has been conducting its accommodation reviews across York region.

The one in Maple, has sparked the most discord so far.

Parents say it’s because the process has been biased from the start.

“The last time a school, at full capacity, has been closed was never,” said parent Joe De Matteis.

“We feel their minds were clearly made up to close Our Lady of Peace right from the start,” he said.

He says the process was never consultative as it was meant to be and that the board chose to study only three schools in Maple, not all nine.

Parents say they are shocked why the board would choose to close a school nestled in a community and keep John Kelly Catholic Elementary School open, even though it’s on a main arterial road, right next to a gas station.

Parents said they’re concerned that the principal of Blessed Trinity sent an email to staff weeks before the board voted to initiate the Maple review, that accurately described the outcome of the report before it was made public.

The board issued an apology for the email “miscommunication” last week.

Carol Cotton, chair of the board, says the ministry guidelines suggest a “preferred recommendation” be made for the “community and trustees to react to,” she said.

“What we found is that there is quite a successful French program that is growing and going to need more space. They are two declining English programs that are reaching the level that there are challenges delivering the program, such as split grades,” she said.

She says it’s inaccurate to say the school is almost at capacity, adding that the English and French streams are separate. “The French program is growing, and it will get more space to grow at Blessed Trinity,” she said.

“It’s wonderful that they forged a great community, but you have an English program being offered in the school that is not equitable to others in the board . . . , because they are too small.

“Our goal is to make that better, to have an optimal number of students. And, on a financial side, by putting them all together, we have a greater utilization of the facility,” she said.

“And we close a school, which is what this whole process is driving, to eliminate unfunded pupil places throughout the board,” she said. Cotton added that this choice reduces capacity by 478 places.

The parents say they the board’s numbers don’t add up.

They say they have hired their own experts to evaluate the numbers, which show that the board would save more money in the long run by keeping Our Lady of Peace open and consolidating the other two schools.

They have also retained legal counsel to file a cease-and-desist order to stop the process.

More than 900 people have signed an online petition urging the board consider other options.

The moves are having an impact. Vaughan-Woodbridge Trustee Dino Giuliani says, given the conflicting information he has in hand, he doesn’t feel comfortable making a decision Tuesday night.

“These parents are asking (for) reasonable answers to reasonable questions, and so am I. And we haven’t gotten those answers . . . . I hope the board does the right thing to clear the air and be transparent,” said Giuliani, adding that trustees need more clarity before they “can make a decision to close either school.

Giuliani said he will be asking for a deferral of the vote. “Given what’s going on here . . . the integrity of the board is being challenged, and we, as trustees, have to restore that.”

In the meantime, Mousseau says she and many other families have already started to look for other options if their school is closed — which includes taking their children out of the Catholic board altogether.

“We will likely pull our children out of the board, if they move the French program,” she said.

“And it’s sad, because the Catholic board is struggling with how to keep enrollment up . . . , but they are making decisions that are really pushing people out.”