Galleries Videos CONTACT ADVERTISE
Famagusta 32°
few clouds
BUSINESS EDUCATION ENTERTAINMENT HEALTH POLITICS SCIENCE SPORTS TECHNOLOGY
12:08 Guide To Online Sports Betting: How To Choose A Sportsbook
08:28 What Are Some Reasons to Consult a Brain Injury Lawyer?
09:24 Blockchain Solutions for Enterprises: How To Increase Efficiency And Profitability
07:06 How To Deal With A Car Crash In New York
17:43 Tips to keep in mind while choosing the casino site
11:34 Relation Between Employee Theft and Pre-employment Screening Check
04:37 Search your own desired site to play sports for betting
18:00 Top 3 Career Path Options for Business Analysts Preview
15:35 The history of Imen Jane, who is the influencer and the charges on the...
18:48 Sebastian Vettel's Greatest Races
BIST
1121
GOLD
474.495
USD
7.8051
GPB
10.0716
EUR
9.1132
Breaking News
Top 3 Career Path Options for Business Analysts Preview
Close

News that Adrian Peterson will become an unrestricted free agent after 10 seasons with the Vikings shouldn’t cause shrieks of disbelief. Anyone not living on Mars knew the Vikings had zero intention of exercising a contract option that would pay Peterson... 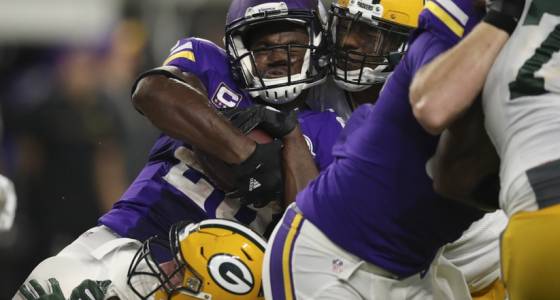 News that Adrian Peterson will become an unrestricted free agent after 10 seasons with the Vikings shouldn’t cause shrieks of disbelief. Anyone not living on Mars knew the Vikings had zero intention of exercising a contract option that would pay Peterson $18 million next season.

The breakup technically wasn’t termed a divorce though, with both sides issuing statements that left open the possibility of Peterson returning at a much cheaper salary.

“We will continue to have conversations with his representatives and leave our future options open while determining what is best for both parties moving forward,” General Manager Rick Spielman said.

Peterson echoed that sentiment in his statement to ESPN. “The door is still open to find some common ground,” he said.

Sorry, but it’s time to close that door shut.

Peterson’s legacy as one of the organization’s all-time greats is secure, but the fit no longer makes sense. Peterson’s age, physical decline and limited skill set can’t be overlooked just because we all once thought he wore a Superman cape.

Peterson struck fear in the hearts of defensive coordinators for most of the past decade as one of the NFL’s most supreme talents. The last stop of his career will be Canton.

But perfect endings involving superstars aren’t guaranteed in sports, and Peterson’s case provides us another example.

Let’s deal with reality. Peterson turns 32 in three weeks. He plays a position that historically has been unforgiving to those on the wrong side of 30.

He has amassed more than 2,400 carries in his career, hellbent on dishing out physical punishment on many of those. He has battled injuries in recent years, a red flag under any circumstance, much less to a 32-year-old running back with many miles on his tires.

When he was healthy this past season, Peterson averaged 1.9 yards per carry, by far the lowest of his career. Some of that ineffectiveness can be attributed to his inept offensive line, but that doesn’t provide a blanket excuse. Peterson’s usual burst was lacking.

He also no longer fits with the Vikings preferred offensive philosophy. Peterson historically has thrived with his quarterback under center. That’s not the Vikings offense anymore.

The Vikings, like many other teams, want to operate with the quarterback in shotgun. NFL offenses have evolved in this passing craze. Peterson doesn’t look comfortable in shotgun formation, and he’s not nearly as effective.

He also can’t be trusted on third down, either. Almost every season of his career ended with Peterson vowing to improve his receiving and pass-blocking skills during the summer. And yet those deficiencies always remained.

So why would the Vikings want to bring him back, even at a reduced price? And would Peterson accept a reduced role for far less money?

Saying goodbye to athletes who have provided so much success and joy and popularity among fans is never easy. The Vikings certainly have stuck by Peterson through difficult times. Contrary to how he felt during his suspension over his child-abuse case, the Vikings were remarkably loyal to Peterson.

Turning the page would be a business decision, a football decision.

Peterson always set outrageous goals for himself, and you never fully doubted him because, well, he’s Adrian Peterson. He can do anything, right?

He won an MVP award and came close to setting the NFL single-season rushing record after blowing through his ACL rehab protocol. He basically put the Vikings on his back and carried them to the playoffs. I told myself to never doubt Peterson again after that season.

Nobody outruns time, though. And we’ve witnessed enough deterioration in his body and flaws in his game to realize that we no longer should cling to that splendid vision of Adrian Peterson in 2008 or 2012.

The totality represents his legacy, a future Hall of Famer and once-a-decade talent. The Vikings must deal in reality, and that picture looks different.

Peterson provided many thrills in a Vikings uniform. But it’s best for the organization to look forward now.