Though only 40 minutes long, The White Helmets may not be an easy documentary to watch.Filmed in war-ravaged Syria, its tense scenes capture children being pulled, crying and bloody, out of rubble. Billowing clouds of dust engulf nearby buildings following... 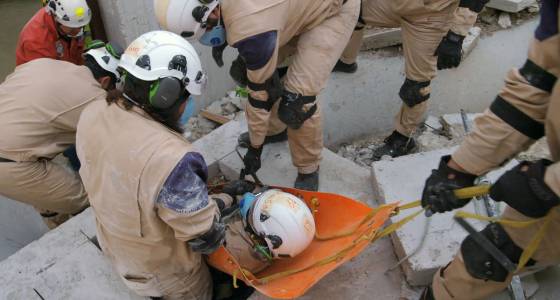 Though only 40 minutes long, The White Helmets may not be an easy documentary to watch.

Filmed in war-ravaged Syria, its tense scenes capture children being pulled, crying and bloody, out of rubble. Billowing clouds of dust engulf nearby buildings following airstrikes. Throughout, there is the constant spectre of death.

The documentary focuses on the Syrian Civil Defence, better known as the White Helmets, a group of Syrian civilians — from bakers to tailors to engineers — who have volunteered to act as first responders amid their country’s brutal, years-long civil war. Almost daily, the White Helmets risk their lives by rushing into just-bombed areas of Aleppo to search for survivors.

A handful of those White Helmets, including 21-year-old Khaled Khatib, took additional hazards by filming such rescue work. Khatib, who is listed as one of three cinematographers for The White Helmets, was thrilled when the Netflix documentary was nominated for an Academy Award.

After weeks of uncertainty following President Donald Trump’s now-frozen travel ban, Khatib was granted a visa to travel to Los Angeles for the Oscars ceremony Sunday. However, the Associated Press reported that, in a last-minute decision by the Department of Homeland Security, Khatib reportedly will be blocked from entering the United States after all.

The AP cited an internal Trump administration correspondence that said “derogatory information” had been found on Khatib, who had been scheduled to travel Saturday from Istanbul to Los Angeles on Turkish Airlines. The term is “a broad category that can include anything from terror connections to passport irregularities,” according to the AP.

According to internal correspondence, Khatib was detained by Turkish authorities and would need a passport waiver to travel to the United States, the AP reported.

When reached Saturday on WhatsApp, Khatib declined to comment. He told the AP that, although he was in Istanbul, he had not been detained.

DHS officials declined to speak specifically about Khatib’s case, citing the department’s privacy policy. When asked to comment, a spokesman for Customs and Border Protection, Michael Friel told the Washington Post: “Valid travel documents are required for travelling to the United States.”

On Saturday afternoon, Khatib tweeted that his passport had not been accepted and indicated he had spent three days at the airport.

“Sad, but important work to do here,” he said.

Khatib said he was a teenager when war broke out in Syria and was inspired to record footage for the White Helmets group after seeing foreign journalists and TV crews travel to his home city of Aleppo to document the civil war.

“I watched them dreaming that I could do that: tell the story of my city and my people,” Khatib said in a Facebook post for the nonprofit group the Syria Campaign. “When I saw the work of the White Helmets, I knew that was the story of Syria I wanted to tell to tell the world.”

The work was gruelling and traumatic. Khatid told CNN that his first mission was a massacre in which more than 100 people were killed.

There was a big massacre and more than 100 people were killed,” he told the network. “That was the worst day for me because I saw the causalities and the bodies of the victims and when I came back to my home I also saw them in my dreams — I saw them when I was awake, and I saw them when I slept.”

He continued filming the White Helmets, however, because he said he felt it was important for people outside of Syria to see their mission.

“It’s easy for anyone to kill someone, but it’s very hard and very difficult to save lives,” he told CNN.

In November 2015, director Orlando von Einsiedel and producer Joanna Natasegara reached out to Khatid about making a documentary. He agreed, spending months learning more about the craft from fellow cinematographer Frank Dow, according to the Syria Campaign.

“By the end my notebook was full,” Khatib said on Facebook.

When the film was nominated for the Academy Award for best documentary short subject Jan. 24, Khatib was bursting with pride.

However, on Jan. 27, Trump signed executive orders that not only suspended admission of all refugees into the United States for 120 days but also implemented “new vetting measures” to screen out “radical Islamic terrorists.” Refugee entry from Syria was suspended indefinitely, and all travel to the United States from Syria and six other countries — Iran, Iraq, Libya, Somalia, Sudan and Yemen — was suspended for 90 days.

Those orders have since been challenged and blocked, and earlier this month the U.S. Court of Appeals for the 9th Circuit ruled unanimously that the travel ban should remain frozen. Trump has indicated he wants to write a “brand new” immigration order.

As recently as last week, Khatib said he planned to travel to Los Angeles for the Oscars in the hopes that a win would inspire those back home.

“If we win this award, it will show people across Syria that people around the world support them,” he said on Facebook. “It will give courage to every volunteer who wakes up every morning to run towards bombs.

“If I cannot enter the US, I will not give up: we know that we have many friends in US, that there are people that share our humanitarian values. I look forward to meeting them all one day.”

However, on Saturday morning, Khatib tweeted that he would not be attending the Oscars after all “due to intensity of work.” He did not elaborate much further. Several hours later, he posted the message on Twitter saying his passport had not been accepted.

If The White Helmets wins Sunday, the Oscar would go to von Einsiedel and Natasegara, the film’s director and producer, respectively.

Khatib is not the only person whose Oscars travel plans were affected by Trump’s executive order. Iranian director Asghar Farhadi, whose film The Salesman is up for an Academy Award for best foreign film, said in January he would not attend the awards ceremony as a way to protest the “unjust conditions” of Trump’s travel ban.