Oscar Juarez-Luna, an undocumented immigrant who lives in Longmont, will be U.S. Rep. Jared Polis' guest in the gallery seats for President Donald Trump's Tuesday night joint address to Congress. Juarez-Luna said in a Monday interview that he hoped his... 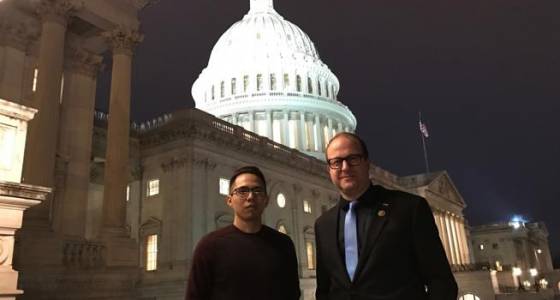 Oscar Juarez-Luna, an undocumented immigrant who lives in Longmont, will be U.S. Rep. Jared Polis' guest in the gallery seats for President Donald Trump's Tuesday night joint address to Congress.

Juarez-Luna said in a Monday interview that he hoped his presence during the president's speech "will put a face on the issue" of the need for Congress "to really take a leadership role in fixing the broken immigration system."

Juarez-Luna is a spokesman for the Colorado Immigrant Rights Coalition but said he'll be representing himself, his family and members of the area's immigrant community while in the nation's Capitol.

Juarez-Luna is a beneficiary of the Deferred Action for Childhood Arrivals (DACA) program created by President Barack Obama's administration to allow some undocumented immigrants who entered this country as children to be eligible for work permits and get deferments of deportation proceedings.

Polis said in a statement that Juarez-Luna and others like him who were brought here as children, went to school here and want to remain as legal residents by satisfying certain conditions that would be set in the proposed DREAM Act — a not-yet-passed federal law — "represent what hold dear in the United States — a nation of immigrants and a nation of laws.

"We must show President Trump how aspiring Americans make us greater, if only we let them," said Polis, a Boulder Democrat who represents Colorado's 2nd Congressional District. "I stand by Oscar and hard working immigrants like him on the night of the joint address, and every day before and thereafter."

Polis' staff said Juarez-Luna moved with his family to the United States from Mexico when he was a young child. He grew up only knowing the United States as home and even wanted to serve the country in the military. But when he tried to enlist, he learned he was unable to do so because he was undocumented.

Juarez-Luna then pursued a degree in mechanical engineering and has become an advocate for other immigrants.

"From when I was a young child, I have only known America as home," said Juarez-Luna, who's now 25. "I love this country, so much so that I wanted to defend its freedoms in the military for my community and my family. My dreams are American dreams."

Polis' staff said Juarez-Luna's potential deportation has been deferred and that he has obtained a permit to work legally — a permit Juarez-Luna could lose if the federal DACA program is terminated.

Polis and several other members of Congress announced in January that they would each invite a person from a marginalized community to be their guests at the presidential address. The goal is to fill the U.S House of Representatives' gallery with "people directly impacted by divisive policies," Polis' staff said.

While Juarez-Luna will be Polis' guest, the Longmont area where he lives is in Republican U.S. Rep. Ken Buck's 4th Congressional District.