Galleries Videos CONTACT ADVERTISE
Famagusta 32°
few clouds
BUSINESS EDUCATION ENTERTAINMENT HEALTH POLITICS SCIENCE SPORTS TECHNOLOGY
12:08 Guide To Online Sports Betting: How To Choose A Sportsbook
08:28 What Are Some Reasons to Consult a Brain Injury Lawyer?
09:24 Blockchain Solutions for Enterprises: How To Increase Efficiency And Profitability
07:06 How To Deal With A Car Crash In New York
17:43 Tips to keep in mind while choosing the casino site
11:34 Relation Between Employee Theft and Pre-employment Screening Check
04:37 Search your own desired site to play sports for betting
18:00 Top 3 Career Path Options for Business Analysts Preview
15:35 The history of Imen Jane, who is the influencer and the charges on the...
18:48 Sebastian Vettel's Greatest Races
BIST
1121
GOLD
474.495
USD
7.8051
GPB
10.0716
EUR
9.1132
Breaking News
Top 3 Career Path Options for Business Analysts Preview
Close

It’s the photo that’s getting all the attention: Kellyanne Conway, senior adviser to President Trump, sitting with her feet up on a couch in the Oval Office on Monday, reviewing photos on her phone in comfort as a crowd of people join the president... 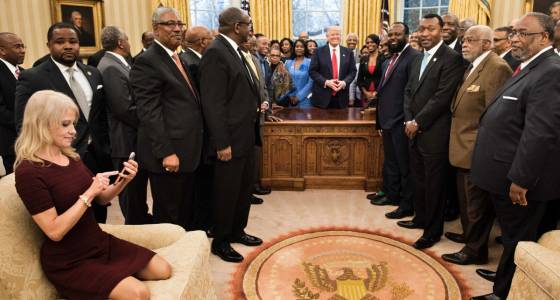 It’s the photo that’s getting all the attention: Kellyanne Conway, senior adviser to President Trump, sitting with her feet up on a couch in the Oval Office on Monday, reviewing photos on her phone in comfort as a crowd of people join the president for a photo behind his desk.

Most people who see that won’t know who those people are or what they’re doing there. The story of the meeting for many will be that Conway is inappropriately at ease in the most important room in the country — a critique that was levied at President Barack Obama shortly after he took office in 2009 and held meetings without wearing a jacket.

But the administration’s flub on that meeting runs much deeper.

The people gathered around Trump’s desk are all representatives of historically black colleges and universities, HBCUs. They were at the White House for a “listening session,” in the formulation of the White House press office, there to share “expert insights on policy issues impacting their individual campuses.” A readout from the event suggests that they discussed “how to create a better partnership between the Trump Administration and HBCUs.”

That was the readout from the White House. The readout from the Education Department, helmed by Secretary Betsy DeVos, took a slightly different angle on the meeting. DeVos faced strong opposition for her confirmation, thanks in part to her embrace of vouchers as an alternative to public education. On the campaign trail, Trump framed school vouchers as a tool for outreach to the black community, and DeVos’s statement after the meeting echoed that.

HBCUs “started from the fact that there were too many students in America who did not have equal access to education,” the statement read. “They saw that the system wasn’t working, that there was an absence of opportunity, so they took it upon themselves to provide the solution.”

“HBCUs,” it continued, “are real pioneers when it comes to school choice. They are living proof that when more options are provided to students, they are afforded greater access and greater quality.”

Well, sort of. HBCUs rose to prominence in the years after the Civil War and through Jim Crow, when public institutions still excluded black students — requiring the establishment of colleges where they could study. They were in many cases pioneers of school choice in the same sense that the emergence of the Negro Leagues in baseball was about choosing to diversify professional sports. It wasn’t about more options being available — it was about having an option, in many cases.

DeVos’s statement suggests that the listening session may not have involved a lot of listening. That’s a theory for which other evidence exists.

Among those invited to attend were Walter Kimbrough, president of Dillard University in New Orleans. He described the meeting in a post on Medium on Monday afternoon. He’d been anticipating being able to give remarks focused on the need to support the Pell grant program, a vital support system for his students. But, as he noted, he and other anticipated speakers saw the amount of time they were allotted to speak at the “listening session” decreased significantly.

“I’m still processing that entire experience” of being in the Oval Office, he wrote. “But needless to say that threw the day off and there was very little listening to HBCU presidents today — we were only given about 2 minutes each, and that was cut to one minute, so only about 7 of maybe 15 or so speakers were given an opportunity today.”

Meaning that, of that group in that photo at the top of the page, at the White House for a listening session, the total amount of time they spent talking was under 10 minutes. No wonder the secretary of education seems to be unclear on the genesis of the HBCU system.

It also means that one can safely question what the Trump administration hoped to get out of the event, and if, for a president consistently under fire for his fraught relationship with the black community, a key goal was simply to show Trump meeting those black leaders, a photo opportunity for the White House to show its outreach.

And the photo from that op that went viral? Conway.