After only 28 seconds of Friday’s game against Wisconsin, it looked like it might be a charmed night for the Gophers. Vinni Lettieri scored a sleight-of-hand goal to give them a quick lead, snaring a puck behind the goal line and plunking it off of... 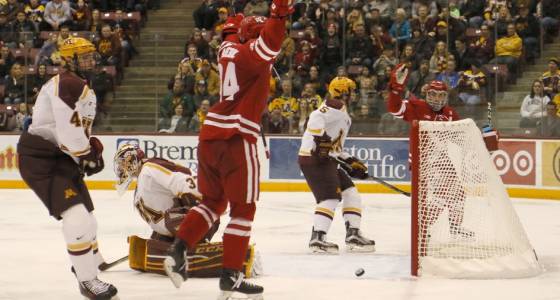 After only 28 seconds of Friday’s game against Wisconsin, it looked like it might be a charmed night for the Gophers. Vinni Lettieri scored a sleight-of-hand goal to give them a quick lead, snaring a puck behind the goal line and plunking it off of Badgers goalie Jack Berry while many fans were still finding their seats at Mariucci Arena.

That would be the only fortunate bounce for the No. 4 Gophers in a 3-2 loss. Though they outshot the 19th-ranked Badgers 38-18—and got a multitude of grade-A scoring chances—they couldn’t overcome a few mistakes and a lack of luck. Wisconsin (18-10-1, 11-4-0-0 Big Ten) scored three consecutive goals in the second period to extend its win streak to three games and tie the Gophers (20-9-2, 11-4-0-0) for first place in the Big Ten.

Lettieri scored a second goal at 11 minutes, 52 seconds of the third period, but Berry did not allow the Gophers to get any closer. He stopped 36 shots, including 17 of 18 in the third period. Trent Frederic, Aidan Cavallini and Ryan Wagner scored for the Badgers.

The Gophers were on their toes throughout the first period, using their speed and assertiveness to create superior scoring chances. Lettieri’s goal demonstrated both, along with a dash of opportunism.

Taylor Cammarata got the puck at the left point and plunked it off the end boards to the left of the net, where Lettieri picked it up. He instantly flicked it toward the goal, and it hit a sliding Berry and dropped behind him to put the Gophers ahead 1-0.

That held up through the rest of the period. The Badgers managed only one shot on goal in the first 11:49 and five in the period, failing to get any shots on net during a pair of power plays

As the second period began, the Gophers were not quite as sharp, and it cost them. The Badgers twice exploited their mistakes to take a 2-1 lead, even as they continued to be badly outshot.

At 3:42, the Gophers got caught flat-footed as Grant Besse and Frederic charged into the zone. Frederic blasted Besse’s pass past Schierhorn to tie the score 1-1. The Gophers came agonizingly close to regaining the lead less than three minutes later, when Rem Pitlick’s shot from the right edge of the goal crease got past Berry and skidded nearly the full length of the goal line. But replays showed the puck never crossed it, leaving them empty-handed.

Frederic was called for slashing on that sequence, giving the Gophers their first power play. It fell apart halfway through, giving the Badgers a shorthanded goal and their first lead of the game.

Brent Gates Jr. and Bristedt both got open looks on the power play but misfired. Then the puck got away from Steve Johnson near the blue line, allowing Luke Kunin and Cavallini to pounce. They raced off on a two-on-one, and after Schierhorn stopped Kunin’s shot from the left circle, a crashing Cavallini drilled in the rebound at 7:22.

A penalty to Wisconsin’s JD Greenway extended the Gophers’ time on the power play and gave them a five-on-three advantage for 30 seconds. As they had for much of the period, they continued to be slightly out of sync, misdirecting and mishandling passes and scattering their shots.

Their lack of precision really hurt them late in the period, when a penalty for too many men on the ice paved the way for the Badgers to double their lead. On the power play, Jake Linhart fired a shot from the center point that Wagner tipped in from the slot with 55.6 seconds left in the period for a 3-1 Wisconsin lead.

The Gophers poured it on in the third, putting shot after shot on net and pulling within 3-2 on Lettieri’s one-timer off Berry’s glove.