Abdul Mohammed sits in his white van and frets.In front of him in a parking lot near Minneapolis-St. Paul International Airport are 300 other taxis, each of whose drivers will wait for hours to make the 1.5-mile trip to the terminal to pick up a passenger.Mohammed... 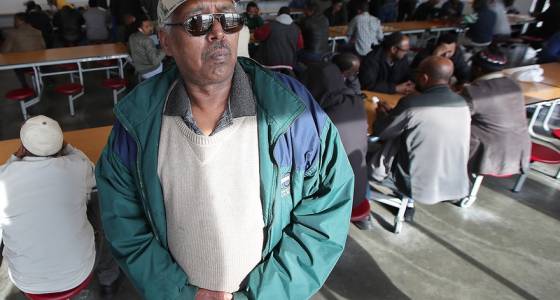 Abdul Mohammed sits in his white van and frets.

In front of him in a parking lot near Minneapolis-St. Paul International Airport are 300 other taxis, each of whose drivers will wait for hours to make the 1.5-mile trip to the terminal to pick up a passenger.

Mohammed has been driving an airport taxi since 1989, but he’s not sure how long he can hang on. The day before, he worked for 12 hours and made just two trips. After gas and his daily lease payment, the $80 in fares he collected shrunk to just $25.

“Our American dream has been cut short,” said Mohammed, an Ethiopian immigrant who lives in Brooklyn Park. “Our business is saturated. There are too many drivers. You can’t even raise a family.”

Business has gotten tougher for Mohammed and hundreds of other cabdrivers in the Twin Cities for a simple reason: Uber and Lyft. The ride-sharing services have transformed the transportation business since their arrival in 2013, and cabdrivers have lost out.

Now, some of them are improving their games in an effort to compete: embracing technology, spiffing up their vehicles and improving customer service. But the ride-sharing companies are still usually cheaper and often more convenient. Elizabeth Flores - Star Tribune Slow ride: Cabdrivers often wait for hours in a giant holding pen near the Minneapolis-St. Paul airport waiting for a call.

Nowhere is the challenge more obvious than at the airport, where Uber and Lyft have been allowed to pick up passengers since April. Cabdrivers, who now wait as long as six hours for a customer, are horrified by the change.

“I think in the next year or so we may be out of business,” said Jamal Adem, owner of Airport Express Super Taxi, the second biggest operator at MSP. “Most of the drivers are looking for another job. This is serious.”

Uber says it now provides more than 100,000 trips per week in the Twin Cities, which far surpasses any cab company. Lyft, the No. 2 ride-sharing company, declined to provide local data.

Altogether, the two biggest cab companies — which control 65 percent of the cabs in the Twin Cities — are providing about 50,000 trips per week.

Uber and Lyft officials said they are not trying to eliminate traditional taxicabs. “We see ourselves as a supplement to other transit options, not a replacement,” Lyft said in a written response to questions.

The question is whether the cab industry can innovate and compete in this new marketplace. While more people are paying for rides than in the past, the number of for-hire vehicles on the road is growing at an even faster rate.

That’s leaving less business for the taxis. By 2020, Uber, Lyft and other so-called transportation network companies are expected to control 67 percent of the for-hire vehicle market in the United States, up from 15 percent in 2014, according to a report by the Aite Group, a research and advisory firm in Boston.

“There could be a scenario where the taxi industry collapses, even though there is a lot of demand,” said Gwenn Bezard, Aite’s research director. “The problem is, nobody is making money anymore.”

The threat that taxi operators face is apparent on the second floor of the airport parking garage, the designated pickup spot for Uber and Lyft.

On a recent Monday afternoon, business was booming. A trio of skiers returned from the slopes of Colorado. Two young parents carried an infant in a car seat. All the time, passengers looked at the Uber or Lyft apps on their phones to monitor their drivers’ progress.

Though some wait as long as 10 minutes, the passengers don’t complain. Most say Uber and Lyft cost half as much as a traditional taxicab.

In December, the total number of e-trips at the airport — which largely consists of Uber and Lyft rides — reached 31,478, up sevenfold since January 2016. Meanwhile, monthly cab rides dropped 25 percent to 40,171 over the same period.

Some Uber and Lyft drivers say they concentrate on airport runs because the business is steady and there’s never a long wait for a customer.

“I start out at 7 in the morning and I don’t stop until 1:30 in the afternoon,” said Charles Hinze, a retired truck driver who earned enough driving for Uber and Lyft to pay off his $13,000 car in a year. “That way I have the rest of the day to myself. I don’t like rush hour, and I don’t like the night crowd.”

Uber and Lyft also benefit from the airport’s rules, which offer far lower fees and streamlined procedures for ride-sharing companies.

While cabbies wait in lines, Uber and Lyft drivers go straight to the curb. Airport officials say the lines are necessary so travelers never have to wait for a taxi. Airport workers dispatch the cabs and constantly monitor the flow of vehicles from one holding area to another to match supply with demand.

The ride-sharing model, by contrast, involves no dispatchers, with passengers arranging rides by contacting the services directly, via an app on their phone.

There are also a lot of taxis chasing a shrinking market.

Drivers said the airport has refused to consider a limit on the number of licensed drivers, which climbed slightly this year, to 787 vehicles. Airport officials said the market could be adequately served with about 250 cars.

“It does seem to me that it would be better to have fewer people making more runs,” said Rick King, a member of the Metropolitan Airports Commission who heads the committee that oversees ground transportation.

Still, the growing number of cars on the road also weighs down what Uber and Lyft drivers can earn.

When Uber arrived in the Twin Cities, the company told drivers they could make as much as $1,150 per week. But few achieve that kind of success, even drivers who log more than 50 hours per week in their cars. In a Star Tribune survey of more than 70 drivers, the typical full-time driver reported earning about $725 per week.

Out of that, drivers must pay all of their own expenses plus return about a quarter of their income back to Uber and Lyft as commissions for being part of the system.

Some drivers have quit because they weren’t making enough.

“Uber is good for the guy who owns Uber, and good for the riders, but it is not good for drivers,” said Lencho Kemer, who spent three years driving for Uber before quitting for another transportation job last year.

An Uber spokeswoman said the company has taken steps in the Twin Cities to boost earnings and improve relations with its drivers.

Part of Uber’s and Lyft’s success is that they are expanding the market.

Most of those flocking to Uber and Lyft are people who rarely if ever used taxis in the past, according to recent transportation studies and a Star Tribune analysis of airport data.

“What Uber and Lyft have done a really good job of is creating additional customers that didn’t exist before, because they have this new, innovative way of getting a ride,” said Steve Pint, president of Transportation Plus, the parent company of Yellow Cab and several other taxi businesses in the Twin Cities.

The airport itself has not done any market research on Uber and Lyft riders, but travelers told the Star Tribune that in the past they either drove themselves, used Metro Transit or took rides from friends and family. A few used taxis.

Uber and Lyft customers cite a variety of factors — including the friendliness of drivers and the cleanliness of cars — for using the new services. But the main reason is cost. Uber and Lyft offer trips for $1 per mile, which is far below the standard rate of $2.50 per mile charged by local cab companies.

“People have had terrible experiences with cabs,” said Grant Horntvedt, 27, who recently saved $30 by taking an Uber ride to his home in Plymouth from the airport. “Once you see the difference, I don’t see anybody going back to taxis.”

Mike Powell, who drives for Blue and White Taxi, is determined to change perceptions.

Powell’s cab is immaculate. He offers every passenger a free bottle of water and a Dum Dum lollipop. And he’s relentlessly friendly, able to coax a smile out of even the grumpiest fare.

In short, he approaches customer service much like a typical Uber or Lyft driver.

On a recent Friday night, Powell rarely stopped, preferring to drive 10 miles for a fare rather than sitting at a taxi stand.

“In this business, it’s all about making money while the wheels are turning,” said Powell, who looked into driving for Uber but decided he could make more money behind the wheel of a traditional taxi. “A lot of people don’t like the small fares, but $5 means another 50 miles I can drive.”

Powell spent the bulk of his night traveling through the scruffiest neighborhoods of St. Paul. He brought a woman home from the Ramsey County Detox Center. He was stiffed by a drunk customer who couldn’t pay his $6.35 fare. And he had a couple of no-shows.

One of his secret weapons: music. He asks every customer to name their favorite musician and favorite song. Then he finds it on his phone and cranks the volume.

Over the course of the evening, he played everything from Mitch Miller’s “Red River Valley” to Somali pop music.

Lavelle, a passenger who avoided eye contact and mumbled when he got into Powell’s cab at midnight, was surprised to find himself dancing in the back seat and singing along with Michael Jackson. “I appreciate the DJ’ing,” Lavelle said as he exited the van.

Waleed Sonbol, Blue and White’s owner, said cab companies have to think creatively if they want to catch up with Uber and Lyft. He has cut his dispatch team in half and updated his technology so customers can use an app to call a cab. About three-quarters of his business is now automated.

But Sonbol is also paying attention to the little stuff. Anybody caught with a dirty car is automatically subjected to three surprise inspections. And he’s listening to his customers, who can now review his drivers similarly to the way riders can rate Uber and Lyft.

In the beginning, when he was receiving as many as 1,500 reviews a day, about half of the reports were negative. But after the novelty wore off and his drivers began responding to the complaints, the traffic slowed to about 100 per day. And 80 percent of the reports are now positive.

“A lot of people have left this industry. We have a lot of empty cars,” Sonbol said. “But we are winning back customers by some of the things we are doing. We’re always looking for a better way.”