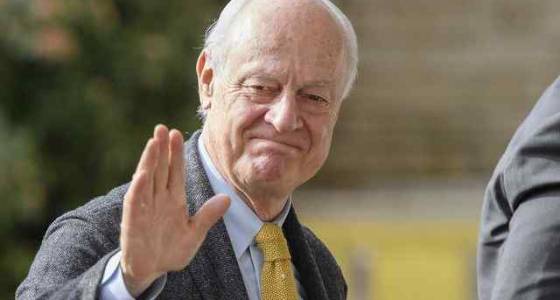 BEIRUT >> Government warplanes pounded a rebel-held neighborhood in the central city of Homs on Sunday, killing at least three and wounding dozens, Syrian opposition activists said, and President Bashar Assad’s forces pushed ahead in Syria’s offensive on the historic town of Palmyra held by the Islamic State group.

The Britain-based Syrian Observatory for Human Rights and pro-government media said troops were about 9 kilometers (6 miles) west of Palmyra, which his home to some of the world’s most treasured archaeological sites.

IS overran the city, prized for its ancient Roman archaeological ruins, for a second time in December. In March last year, government forces had captured the town ending a 10-month rule by the extremists.

The Observatory said government forces and their allies now control hills that oversee three gas fields west of the town amid intense airstrikes. Syrian troops and their allies launched a wide offensive toward Palmyra in mid-January under the cover of Russian airstrikes.

The government-controlled Syrian Central Military Media confirmed that troops are now a few kilometers (miles) away from the town, which is home to the UNESCO heritage site for which Palmyra is famous and which has already suffered massive destruction at the hands of IS.

The Islamic State group has been under pressure in Iraq and Syria over the past months and the march toward Palmyra comes days after the extremists lost the northern town of al-Bab to Turkish troops and Turkey backed opposition fighters. Iraq forces are also on the offensive to capture the western part of the northern Iraqi city of Mosul.

SCMM said Syrian troops captured the town of Tadef from IS on the southern edge of al-Bab, adding that experts were dismantling explosives and booby-traps left behind by the extremists.

Palmyra is in the central province of Homs where violence was reported Sunday in the provincial capital that carries the same name.

Meanwhile on Sunday, the United Nations envoy for Syria met with opposition representatives separately in Geneva reflecting the groups’ struggle to form a united front in peace talks with the Damascus government. Staffan de Mistura met first with representatives of the opposition delegation dubbed the Cairo platform.

After the meeting, Jihad Makdissi, at the helm of the Cairo delegations, said the envoy gave them papers on “how to facilitate talks” between the various opposition groups and the government.

Makdissi, a former spokesman for the Damascus government who left Syria in 2012, sought to downplay differences in the opposition saying they were “diverse” rather than “fragmented,” and could agree on technical rather than political points.

“We want to be one delegation, not a unified delegation,” he told reporters.

Opposition activists said airstrikes on Homs’ rebel-held neighborhood of al-Waer on Sunday came a day after the area was subjected to more than 40 air raids that killed and wounded dozens. The airstrikes appeared to be in retaliation for militant attacks in the city on Saturday that killed a senior security officer and at least 31 others.

The Observatory said that besides the airstrikes, al-Waer was being subjected to shelling.

The swift, high-profile attacks against the Military Intelligence and State Security offices were claimed by an al-Qaida-linked insurgent coalition known as the Levant Liberation Committee.