There’s fowl play afoot between the buns of Subway sandwiches, a new report claimsThe fast food chain’s “chicken” contains only about 50 percent actual chicken DNA — and is chock full of soy filler, according to researchers who conducted lab tests... 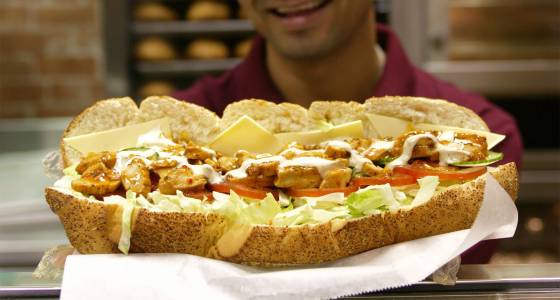 The fast food chain’s “chicken” contains only about 50 percent actual chicken DNA — and is chock full of soy filler, according to researchers who conducted lab tests in Canada.

The restaurant’s oven-roasted chicken contains a mere 53.6 percent chicken DNA and its chicken strips contain about 42.8 percent, according to an investigation by the Canadian news outlet CBC Marketplace.

By contrast, grocery store chicken weighed in at 100 percent, according to the news site.

Test results left a bad taste in the mouths of customers, who called it dishonest to label the meat chicken — when it’s basically half vegan.

For the Toronto-area study, independent DNA researcher Matt Harnden, conducted biopsies on five pieces of the oven roasted chicken and five chicken strips, which are found in the restaurant’s popular wraps.

Researchers also tested other fast food restaurant chicken and found higher percentages of poultry DNA, according to the report.

But the company released a statement earlier in the day saying it, “cannot confirm the veracity of the results of the lab testing.”

It added, “We are concerned by the alleged findings you cite with respect to the proportion of soy content. Our chicken strips and oven roasted chicken contain 1% or less of soy protein. We use this ingredient in these products as a means to help stabilize the texture and moisture,” the statement notes.

Subway will “look into” the matter with its supplier, it said.