Streetcars are Toronto’s civic treasure and the King St. plan gives them their due: Keenan | Toronto Star

I’ve got to admit, there’s always something that seems unTorontonian to me about people who hate streetcars. On some level, I can understand the arguments they are making — both emotional (they get in the way while I’m trying to... 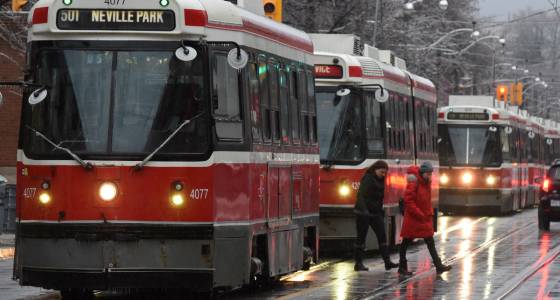 I’ve got to admit, there’s always something that seems unTorontonian to me about people who hate streetcars. On some level, I can understand the arguments they are making — both emotional (they get in the way while I’m trying to drive!) or logical (one disabled streetcar backs up the whole line).

But the rattling, rumbling, clanging, rail cars seem to me like so essential a part of the city that objecting to their presence here seems foreign — not bad, per se, but unfamiliar. As if they were pronouncing the second “t” in Toronto. I have the urge to ask, “Where you from?”

So that’s my bias — my childhood bedroom on Gerrard St. E. looked out onto a streetcar route, as did the apartment on Bathurst where I lived when I was first married. The Red Rocket has always been part of the look and sound of home to me and has for great periods of my life been the first and last leg of most trips I make around the city.

Which may be why I feel like the King Street Transit Corridor pilot project, which is being studied now for a final proposal by summer and set to launch this fall, is an obvious good. And overdue. After years of treating streetcars as an afterthought, we’re finally ready to test ideas to make the busiest route — busier than some of our subway lines — run faster and more reliably. To give priority on the road to the streetcars. It’s about time.

There are lots of evidence-based arguments for why this makes sense of course: twice as many people — 65,000 of them — travel on King by streetcar each day as do by car, but up until now we’ve devoted about twice as much space on the road to car travel. A single articulated streetcar can carry 200 people — the new ones slowly arriving carry 250 — and yet they can be forced to wait minutes behind a single car, carrying one person, making a left turn, or behind a line of four or five cars blocking the road waiting to access the right turn lane. The road is not getting any bigger. There’s no space to widen it. It’s full, and if we need to allow more people to travel on it, the answer is going to be more transit capacity, not more reliable car movement.

(Some argue in favour of buses, which can pull over to the curb and so on — our current low-floor bus model has a “crush capacity” of 53 people, so we’d need four times as many on the road, which would pretty much fill it up. And because there’s no space to create bus bay cutaways, they would block right turn lanes picking up passengers and disrupt traffic while pulling in and out of different lanes.)

Those are some of the numbers. Some reasoning. Some logical arguments. But I’ve come to think that the people who hate streetcars (and there are some, the Toronto Sun editorial board recently suggested launching a “War on the Streetcar” as a rebuttal to the King plans) will fail to be impressed by them.

Their argument is emotional. And so, in a lot of ways, is mine.

I grew to hate riding buses during my years living in Scarborough without a driver’s license. For some reason, the way they jerk back and forth in traffic is more unsettling than the vibration of the streetcar along the tracks. The way a bus feels when it’s crowded is more chaotic than the way even a very cramped streetcar feels. Today, most days when I take transit to work, I will walk seven or eight minutes out of my way to ride a streetcar rather than hop on a bus — the total trip is about 10 to 15 minutes longer when I ride the streetcar route, but it feels better, more comfortable.

The view from the streetcar is a good one, looking down on the cars below and across at the storefronts. As someone once said to me, on a subway you travel underground and bypass a neighbourhood, on a streetcar you travel through it and get to see it.

By now, the iconography of streetcars is hardwired into the version of the city that exists in my imagination. The wires overhead, the tracks in the road, the single centre headlight coming down the road through the night — these things are up there with the CN Tower and city hall as images that come to mind immediately when you think of Toronto, the constant backdrop of life. Like the L train platforms over streets in the Loop in Chicago, or like skyscrapers in Manhattan, or cloverleaf freeway interchanges in Los Angeles, or the mountain and ocean views in Vancouver: unmistakable characteristics that help define a city.

When I was a kid, my dad told me about the Russian hockey player visiting Toronto who was coached by locals tutoring him in English to tell the press he was “Strong like bull, fast like streetcar.” (It turns out he may have been repeating an apocryphal story, since “strong like bull, smart like streetcar” was a catchphrase on a 1950s sitcom, according to Google Answers.) The joke in my dad’s version was that reporters here would know, while the player might not, that a streetcar doesn’t go all that fast. But it does go.

My grandfather used to tell the story of boarding the Carlton car with my nanna while she was in labour to get to the hospital because the family car was snowed in, only to have a fellow passenger berate him “for taking his wife out in her condition” during a blizzard. They got to the hospital just fine. Took the baby home on the streetcar too.

Also when I was a kid, we were taught a song that included a verse: “You can’t get to heaven on the Queen streetcar, ’cause the Queen streetcar don’t go that far…” And that’s accurate, but it does seem like it might. It covers so much ground if you ride it from one end to the other, from Mimico through Parkdale and Queen West, downtown and Leslieville and all the way out to the RC Harris water filtration plant.

But no. It doesn’t go to heaven, nor even to Scarborough — proving the streetcar won’t go everywhere you want to go. But you do want to go everywhere the streetcar goes: the Eaton Centre, Woodbine Beach, City Hall, the AGO, TIFF, High Park, Riverdale Park, Colonel Sam Smith Park, Harbourfront, the CNE, the TSX, the TSO, the Danforth, Roncesvalles, Chinatown, Little India, Little Italy, U of T, Ryerson. That’s some good terrain it covers. Virtually every neighbourhood streetcars pass through is a desirable place to live and work. I don’t think that’s a coincidence.

But King is the busiest. It carries the most passengers, and gets most badly delayed by traffic.

The idea of the pilot on King St. is to test a way to give streetcars priority on King, encouraging cars driving across the city to use adjacent routes such as Wellington and Richmond and Adelaide, while allowing them limited local access to get to driveways and make deliveries and such. The hope is streetcars will move better — faster and more reliably — and that the pedestrian realm (pedestrians outnumber both car and transit passengers on King) will improve as well. The plan is to track numbers to see the effect on King St. and on traffic in a whole downtown area surrounding it. And then adjust the configuration, or go back to the old system, depending on the results.

I hope the result will be that the King streetcar can move better, and faster. I somewhat expect we’ll see some delays of a few minutes in car travellers’ times. I hope that won’t convince us the experiment was a failure. We have to expect tradeoffs — my morning walk from the subway to the office is delayed several minutes each day because I wait at traffic lights while cars pass, dozens of them, on Lake Shore Blvd. It’s fair to ask me to wait a few minutes, so all of them can get through. Likewise, I don’t think a few minutes delay for car travellers is unacceptable if it means a few minutes saved for a far greater number of streetcar riders.

Besides, if you want to drive without streetcars in the way, you have your pick of all kinds of other cities. You can go to Hamilton, or Mississauga, or Pickering. You can go most places, and they won’t have streetcars. We do have them, and they’re a civic treasure. It’s about time we treat them like it.