A small hole in a busy sidewalk is a bigger problem than a large hole in a not-so-busy sidewalk, for two reasons:One: The bigger the hole, the easier it is to see — and avoid.Two: The more foot traffic there is, the more likely it is that someone will... 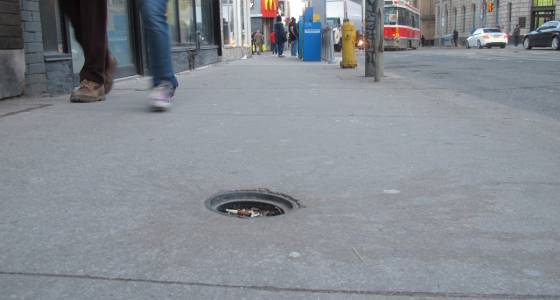 One: The bigger the hole, the easier it is to see — and avoid.

Two: The more foot traffic there is, the more likely it is that someone will fail to see it and step in it.

That’s why the two small, coverless holes we found in a sidewalk on the east side of Church St., between Dundas and Queen Sts., are a lot bigger problem than they appear.

We were hiking up Church recently, just north of Queen, behind a group of a half-dozen people engaged in an animated discussion that clearly diverted their attention from the sidewalk beneath them.

A woman wearing chunky high heels suddenly took a bad step and stumbled, forcing one of the young men in the group to lunge and grab her so she didn’t fall.

They briefly stopped near one of the pawnshops on Church to examine a hole in the sidewalk that apparently caused her stumble, before resuming their journey.

We hurried to catch up to them and asked the woman if she had stepped into the hole, which she confirmed, adding that it wouldn’t have been a problem if she’d been paying closer attention.

We went back to take a look and found a small, circular hole with no cover that was filled with compressed street trash, including a half-smoked cigar that added a rakish air to the orifice.

The hole is small enough that it’s easy for pedestrians to overlook, but big enough to step into, which makes it a serious tripping hazard, particularly for women in fashionable footwear.

We kept going north and noticed several similar holes, all with lids on them, except for one near the entrance to a hostel just south of Dundas that was missing its cover.

We’ve asked transportation services if it can arrange for the holes to be fitted with new covers, or at least temporarily filled with asphalt, until it can figure who’s responsible for them.