Skaters lash out at Supreme and Louis Vuitton collaboration

Supreme may have unveiled its MetroCard design last week to mass fanfare, but another of its collaborations is proving to rile the brand’s skater base.Controversy continues to ripple through New York’s Lower East Side skate community... 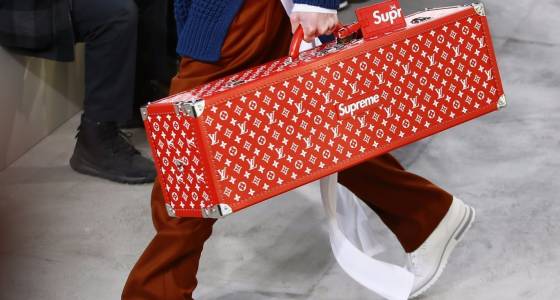 Supreme may have unveiled its MetroCard design last week to mass fanfare, but another of its collaborations is proving to rile the brand’s skater base.

In teaming with the skate-oriented streetwear label, Vuitton will release a collection heavy on accessories — including skater-type ephemera. The collection’s reported high price tags have left Supreme’s original base of skaters nonplussed, with many exclaiming that they feel “exploited” in seeing their tribal garb fed through the luxury assembly line.

According to streetwear blogs, it’s expected that a skateboard carrier from the collection — sold with skate deck and accessories included — will be priced at $54,500. Louis Vuitton did not offer comment on the estimated price.

WWD rode the D train down to the Lower East Side, and spoke with a gamut of skaters — at an LES skate park, skate shop and skate bar.

“I think it’s stupid as ...,” an anonymous thirtysomething skater said of the collection at the Lower East Side watering hole, Forgtmenot. Most skaters who spoke with WWD requested anonymity for fear of retaliation from Supreme employees — a downtown tribe deeply rooted in lower Manhattan’s social scene.

A burly creative in Carhartt overalls also felt disenchanted by the Supreme-Vuitton collaboration. “It solidifies Supreme’s place in fashion, which is so stupid. They started the brand as a … you to fashion, and now they’ve become it,” he said, stationed at Forgtmenot.

“They represent the worst form of street culture,” another thirtysomething skater said of Supreme, which received a cease and desist letter from Louis Vuitton in 2000 after it screen printed the luxury brand’s monogram onto skate decks without authorization. “When you go into the store, it’s full of ..., they vibe you out.”

Some went as far as to call the collaboration “a betrayal.”

Supreme was started as a skater label. The brand’s web site states its original intentions: “In April 1994, Supreme opened its doors on Lafayette Street in downtown Manhattan and became the home of New York City skate culture.

“Supreme grew to be the embodiment of the downtown culture…Skaters, punks, hip-hop heads — the counter counter culture at large — all gravitated towards Supreme.”

According to skaters, this is no longer the case. “It orbits skate; it’s not really on the planet,” one said of the brand’s standing among the skate community.

In the mid-Nineties, the brand’s original Lafayette Street store employed an array of New York-famous youths — many of whom had cameos in Larry Clark’s film “Kids.”

In the time since, the brand’s streetwear cachet has boomed — becoming a favorite of “very rare” seeking collectors. Earlier this month, it was rumored that LVMH Moët Hennessy Louis Vuitton was in the process of acquiring Supreme for $500 million — chatter that was ultimately dispelled.

At the boutique Unique Hype on Elizabeth Street — which flips Supreme rare editions — a Parsons student said the Louis Vuitton collaboration will drive a deeper chasm between Supreme’s skate base and collecting community.

“People are saying it’s going to separate the men from the boys. Also change and divide the audience,” said the student, who rifled through $560 sweatshirts hanging on the store’s shelves.

Multiple skaters told WWD that in the wake of its cachet-laden expansion, Supreme has diverged from its skate roots.

In visiting the Coleman Skatepark under the Manhattan Bridge, many teenagers expressed upset for the Supreme-Louis Vuitton collection, but were spotted wearing Supreme.

“If you buy that Louis Vuitton ..., you’re stupid,” said one teenager.

“It’s overly Hypebeast,” said another teenaged skater — referencing the derogatory term for a male covered in head-to-toe, trendy streetwear, who lacks personal taste. The colloquialism takes its name from a popular streetwear blog.

But older skaters — who own and operate businesses in the Lower East Side — reckoned the collection’s financial opportunity. “It doesn’t seem to be the work of the designer [Nicolas Ghesquière], it seems like the work of the president — looking to make their next Murakami,” said the skater. “I’m not too concerned with everything else going on in the world,” he added.

Another older skater — a onetime frequenter of the shuttered Autumn skate shop — said the Vuitton collaboration could be the byproduct of current media culture. “Everything is bigger and bigger, you have to be loud to pull off your next stunt,” he said.

Louis Vuitton declined to comment on skaters’ claims of appropriation. But in a rare break with company culture, Supreme issued the following statement: “Throughout the history of the brand, we’ve seen our customers have apprehensions whenever we do something unexpected. However, we have always stayed true to the culture from which we came.”

Get the look: Here are the major beauty and hair trends from the Oscars