The United States has 1,750 active nuclear weapons currently deployed, second only to Russia. That's more than enough to make the Earth pretty uninhabitable for awhile, but President Donald Trump is concerned that America's nuclear arsenal is... 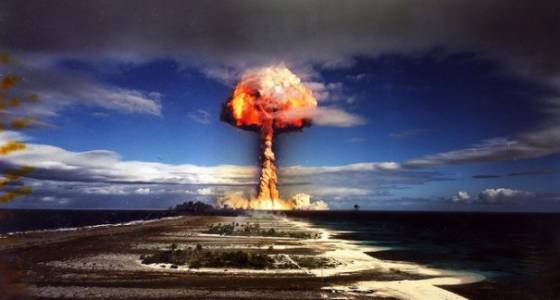 The United States has 1,750 active nuclear weapons currently deployed, second only to Russia. That's more than enough to make the Earth pretty uninhabitable for awhile, but President Donald Trump is concerned that America's nuclear arsenal is too small and wants the U.S. to be at the "top of the pack." Trump supporters say might makes right; nuclear deterrent only works if your enemies fear you. But critics say we should focus our efforts on dismantling nukes, not building new ones. What do you think?

America already has a ton of nukes, but Trump is calling for more. The move is a dramatic shift away from the policy of nuclear disarmament that has guided most of the nuclear treaties between the U.S. and Russia at the end of the Cold War. The most recent nuclear test executed the U.S. military was back in September 1992. Is it time to start building up our nuclear arsenal again?

Trump made plenty of campaign promises to "rebuild" America's nuclear arsenal, but he seems to take the rhetoric a step farther as president. Earlier this year, Trump called for a renewed arms race. Now, with deadlines fast approaching for the New START treaty, which requires both Russia and U.S. to reduce their nuclear stockpiles even further, Trump appears reticent to comply.

Mr Trump called New START "a one-sided deal." Just another bad deal that the country made, whether it's START, whether it's the Iran deal ... We're going to start making good deals," he said.

His supporters feel a stronger, more modern nuclear arsenal would give Trump yet another bargaining chip while negotiating economic and foreign policy abroad. Might makes right. If we dismantle all our nukes or keep giving favorable terms to Russia, at what point do other countries start testing the U.S. if they no longer fear nuclear retaliation?

But Trump's call for rekindling the nuclear arms race is shocking to policy experts, especially at a time when there's been relative peace surrounding nuclear weapons. Ratcheting up tensions seems like a sure-fire recipe to push countries to the brink of war. We already have too many nukes, why do we need to build even more?

"The thrust of U.S. nuclear policy for decades now has been to trim the fat off the U.S. nuclear arsenal," said James Acton, co-director of the Nuclear Policy Program at the Carnegie Endowment for International Peace. "At a certain point," he said, quoting Winston Churchill, "you are just making the rubble bounce higher."

President Obama already committed over $1 trillion to modernizing America's nuclear arsenal. Once completed, the U.S. will have the ability to wage unprecedented nuclear war for decades at a scale never before seen in the history of mankind.

The Obama administration's budget is projecting a trillion dollars' worth of maintenance and upgrades to all three nuclear weapons delivery systems, land and submarine based ballistic missiles and bombers as well as the associated nuclear weapons.

... why does spending a penny more make fiscal or military sense? This is overkill.