PORT CHARLOTTE2 Weeks Ago6 Days Ago2 Weeks AgoKevin Kiermaier was boarding a flight in Tampa, filing back to the coach seats he booked late heading to a New Year's Eve get-together in Utah with current and ex-Rays teammates and their significant others,... 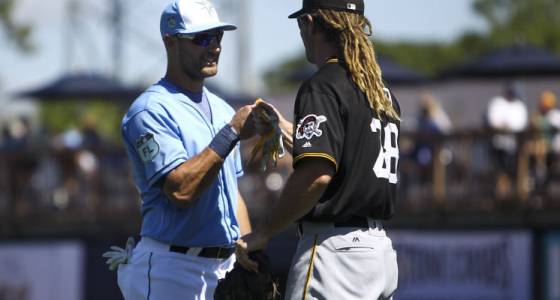 Kevin Kiermaier was boarding a flight in Tampa, filing back to the coach seats he booked late heading to a New Year's Eve get-together in Utah with current and ex-Rays teammates and their significant others, when he heard someone calling his name from the first-class cabin.

"I just turned around and this man and his wife were signaling to me and saying, 'Hey, please, will you switch seats with us?' " Kier­maier said. "They're like in the second row, and I say to him, 'We're in (row) 15, sir,' and he goes, 'I know, but me and my wife are huge Rays fans, we love the way you play, we'd love for you and your girlfriend to switch us seats. It'd be an honor, actually.' "

Kiermaier resisted, but the couple insisted, so they made the trade. After landing in Atlanta to switch planes, Kiermaier waited to pose for a photo with the couple and thank them again, still humbled by the offer.

"They said it made their day doing that for me," he said. "It made my day for them going out of their way like that. That was really something."

That scene is just a snapshot of how life continues to evolve for Kiermaier, whose combination of gold-plated daily highlight defense, always-hustling style of play, true-to-his-roots Midwestern values and politeness, and model good looks has elevated him from unheralded minor-leaguer 3½ years ago to one of the, if not the, most exciting and popular Rays.

And now the marketing world is beginning to catch on.

Starting small, Kiermaier is slowly getting the attention of local and regional companies that want to put his pretty face on their products — though not much, yet, nationally given the challenges inherent with playing in the Tampa Bay market.

Morgan Auto Group has featured Kiermaier in three TV commercials, with plans for more this year promoting its dealerships throughout the Tampa Bay area. The Clearwater-based company behind the Original Protein Water signed him — and gave him ownership shares — to help its major push into the sports drink field. Majestic sports apparel is spotlighting him in in-stadium and in-store signage and internet advertising. Eastbay sports equipment had him on the cover of its winter catalog. The LeBron James-run Uninterrupted media platform added him to its roster of athletes sharing video updates.

Biggest of all could be a deal under discussion with the Tampa-based PDQ chicken chain.

"It's been exciting to watch the interest in Kevin grow from year to year," said Mike Dillon, who handles Kiermaier's marketing as executive vice president of Reynolds Sports Management. "The unique combination of excellent onfield play and off-the-field appeal has really given him some great opportunities to build relationships with some great people and companies in the Tampa/St. Pete area.

"Each year the opportunities have multiplied, and I expect the interest to keep growing. Nationally he doesn't get the attention he deserves, both on and off the field, but regionally this market has really gotten behind Kevin, and he is extremely appreciative for the support and the opportunities that have presented themselves."

The local companies say the appeal is obvious.

"I'm a big Rays fan and like a lot of people we love the way Kevin approaches the game," said Brett Morgan, CEO of the soon-to-be 23-store family of dealerships. "It's refreshing to see a professional athlete who goes hard all the time. I'm not going to say that necessarily embodies what our company is all about, but to a degree it is. Our slogan is, 'We make it happen.' He's a hustle guy, a rare type of guy who has only one speed. … Naturally we thought there was alignment between our brand, what we're trying to do, and Kevin."

Protein Water CEO Tom Carlin said he felt much the same when Dillon approached him about connecting with Kiermaier, planning to make use of his area appeal with billboards, promotional appearances and eventually commercials for the sugar-free, high-energy drink that soon will be sold in Target, CVS, Winn-Dixie and 7-Eleven stores. Carlin said he has similar arrangements in other markets with Denard Span, Justin Verlander, Matt Kemp and retired Torii Hunter, and plans to add NFL players.

"In my mind, I thought of any Tampa Bay Ray I would like to bring on board it would be Kevin Kiermaier," Carlin said. "I'm excited to have him. … I'm going to use him for a lot of things. I gave him some shares (in the company) and I haven't done that to anybody, and we talk to athletes all over."

Just like manager Kevin Cash enjoys having Kiermaier running down fly balls in centerfield and racing around the bases, team marketing officials like having him in their lineup for season ticket-holder events and promotional giveaways.

"Kevin has become one of the faces of the Rays," team president Brian Auld said. "We know he is one of our most popular players, and that popularity grows every year. Given the way he plays the game and how likable he is, we'd be crazy not to capitalize on that by including him prominently in our marketing plans."

Kiermaier, 26, is enjoying the opportunities, insisting on being selective and making sure not to infringe on his onfield work and prep time.

There are times when he still marvels at how far the kid from Fort Wayne, Ind., who was a 31st-round draft pick has come, when he's watching TV and one of his commercials pops on, when kids tell him they now wear No. 39 in his honor, when he gets recognized while eating out — or boarding a plane.

"Having people coming at me, asking to put my face on their products, it's crazy. My parents are always asking me, 'Did you think you'd ever be doing any of this?' And my response all the time is always, 'No,' " Kiermaier said.

"All the love and attention away from the field I've gotten is something I never imagined my whole life. It's reality now, so I just try to never take any of it for granted. And I try to have fun with it."

Marc Topkin can be reached at mtopkin@tampabay.com. Follow @TBTimes_Rays.