WASHINGTON — House Intelligence chairman Devin Nunes said Monday that Congress should not begin a McCarthy-style investigation based on news reports that a few Americans with ties to President Donald Trump had contacted Russians during the 2016 presidential... 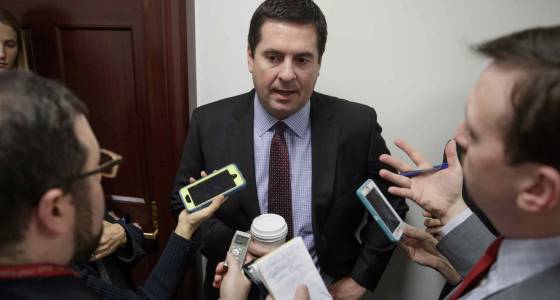 WASHINGTON — House Intelligence chairman Devin Nunes said Monday that Congress should not begin a McCarthy-style investigation based on news reports that a few Americans with ties to President Donald Trump had contacted Russians during the 2016 presidential campaign.

“I want to warn all of you,” Nunes, R-Calif., told reporters on Capitol Hill. “We can’t have McCarthyism back in this place. We can’t have the government, the U.S. government or the Congress, legislative branch of government, chasing down American citizens, hauling them before the Congress as if they’re some secret Russian agent.”

“I want to be very careful that we can’t just go on a witch hunt against Americans because they appear in a news story somewhere,” Nunes said.

Nunes’s comments came on the same day that the Trump administration was pushing back against reports that Trump aides were in contact with Russian intelligence officials during the 2016 presidential campaign. “I haven’t called Russia in 10 years,” President Donald Trump said.

Trump has denied knowing that any of his campaign advisers were in contact with Russians during the campaign. He has also denied that he has financial ties or other connections to Russia. The White House has enlisted the help of the FBI and lawmakers to counter news reports about contacts.

Nunes said he knows of no evidence that Trump aides were in contact with Russian agents. He said he will continue to ask for evidence. Nunes is leading one of three congressional investigations into Trump’s Russia ties.

“We still have not seen any evidence of anyone that’s — from the Trump campaign or any other campaign for that matter — that’s communicated with the Russian government,” Nunes said.

He said that doesn’t mean the contacts don’t exist and that the committee will continue to investigate.

Asked if the FBI had specifically told him that the agency has not found any contacts between any Trump associates and Russian officials, Nunes said: “What I’ve been told is, by many -- by many folks, is that there’s nothing there.”

Nunes said he would not specify which agency has told him that. He said he has been talking with intelligence officials across the government. “In this case, as it relates to any campaign officials dealing with Russians, we don’t have any evidence right now,” Nunes said.