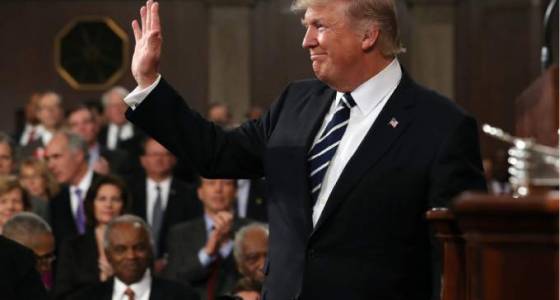 Striking an optimistic tone, Trump declared: “The time for small thinking is over.”

Trump’s address came at a pivotal moment for a new president elected on pledges to swiftly shake up Washington and follow through on the failed promises of career politicians. His opening weeks in office have been consumed by distractions and self-inflicted wounds, including the bungled rollout of a sweeping immigration and refugee executive order that was blocked by the courts.

Ahead of his signing of a revamped order, Trump said, “Those given the high honor of admission to the United States should support this country and love its people and its values.”

Trump sent unexpectedly mixed messages on immigration, one of his signature campaign issues. He pledged to vigorously target people living in the U.S. illegally who “threaten our communities and prey on our citizens.” But he told news anchors before his speech that he was open to legislation that could provide a pathway to legal status, and he told Congress he believed “real and positive immigration reform is possible.”

The president was greeted by enthusiastic applause as he entered the House chamber, though it was filled with Democrats who vigorously oppose his policies and many Republicans who never expected him to be elected. Most Republican lawmakers have rallied around him since the election, hopeful that he will act on the domestic priorities they saw blocked during President Barack Obama’s eight years in office.

First lady Melania Trump sat with special guests who were on hand to amplify the president’s agenda, including the widows of two California police officers killed by a man living in the country illegally. The widow of former Supreme Court Justice Antonin Scalia also sat alongside Mrs. Trump, a reminder of the president’s well-received nomination of federal appeals court Judge Neil Gorsuch to fill Scalia’s seat.