Baltimore County police are searching for a man who they say killed a Parkville woman's pet turtle after burglarizing her home last month.Police say Michael Kennard Jones, 23, was one of two men who broke into a home in the first block of Barnwell Court... 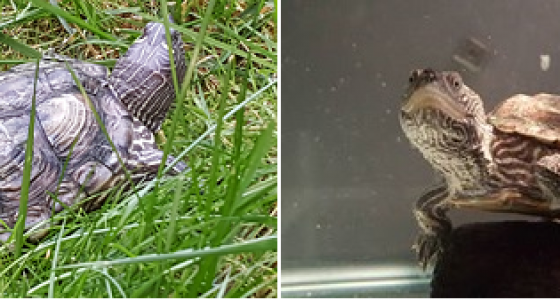 Baltimore County police are searching for a man who they say killed a Parkville woman's pet turtle after burglarizing her home last month.

Police say Michael Kennard Jones, 23, was one of two men who broke into a home in the first block of Barnwell Court during the overnight hours of Jan. 20 or 21, and stole two television sets, gift cards, checks, jewelery and numerous electronic devices.

Before leaving, police say, Jones removed the resident's pet turtle, Donatella, from an aquarium and impaled her with a knife-sharpener.

County police spokeswoman Jennifer Peach said the suspects did not know the victim.

"This was an act of cruelty by that suspect for no reason having to do with this victim," Peach said.

Police have already arrested one of the suspects, Calvin Krasheen Fogg, 24, of the 4400 block of Marble Hall Road on Feb. 17.

"This was a long and complicated process of investigating leads based on the evidence [the suspects] took, and the evidence they left behind," Peach said.

Jones, previously known to reside in the 3200 block of McElderry Street, is being sought on charges of first-degree burglary, aggravated cruelty to kill an animal, and is also wanted in connection with a previous home invasion robbery with a gun, police said. They said he is considered dangerous and should not be approached.

Anyone with information on the whereabouts of Michael Jones is asked to contact police at 410-307-2020.