Galleries Videos CONTACT ADVERTISE
Famagusta 24°
clear sky
BUSINESS EDUCATION ENTERTAINMENT HEALTH POLITICS SCIENCE SPORTS TECHNOLOGY
12:08 Guide To Online Sports Betting: How To Choose A Sportsbook
08:28 What Are Some Reasons to Consult a Brain Injury Lawyer?
09:24 Blockchain Solutions for Enterprises: How To Increase Efficiency And Profitability
07:06 How To Deal With A Car Crash In New York
17:43 Tips to keep in mind while choosing the casino site
11:34 Relation Between Employee Theft and Pre-employment Screening Check
04:37 Search your own desired site to play sports for betting
18:00 Top 3 Career Path Options for Business Analysts Preview
15:35 The history of Imen Jane, who is the influencer and the charges on the...
18:48 Sebastian Vettel's Greatest Races
BIST
1124
GOLD
458.712
USD
7.6460
GPB
9.7865
EUR
8.8844
Breaking News
Top 3 Career Path Options for Business Analysts Preview
Close

Photos of vets being neglected at VA spark outrage

DURHAM, N.C. — A former Marine and his wife say the scene inside a Veterans Administration hospital in Durham, North Carolina, was so shocking that they felt compelled to take pictures and post them to Facebook.Now thousands of people are expressing outrage... 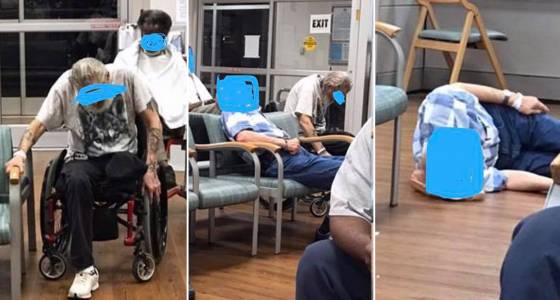 DURHAM, N.C. — A former Marine and his wife say the scene inside a Veterans Administration hospital in Durham, North Carolina, was so shocking that they felt compelled to take pictures and post them to Facebook.

Now thousands of people are expressing outrage and the head of the medical center says an employee involved has been removed from patient care pending an internal review.

Hanna and Stephen McMenamin posted photos of two veterans who were struggling in the waiting room. They said both older men were ignored for hours despite complaining of severe pain. They said one practically fell out of his wheelchair, and the other finally lay down on the floor after being denied a place to rest.

Jesse Lee, a Vietnam veteran, told WRAL-TV that he’s the man in the wheelchair. He said he went to the VA for severe phantom pains after a leg amputation.

“Somebody in real bad pain should be seen,” Lee said. “It felt like a railroad spike was going through my foot. It’s like one of the worst pains you’ve ever felt in your life.”

Lee said he was forced to wait for hours before he got medical attention.

McMenamin said a particular VA nurse appeared to ignore the pleas from patients.

The other man was “very shaky, trembling and he was asking for help. He was getting pretty desperate,” Stephen McMenamin said.

In her Facebook post, Hanna McMenamin said the man asked was ignored when he asked multiple times for a place to lie down. Unable to catch his breath, the couple said, the man stretched out on the floor until employees at the Durham VA Medical Center made him get back up.

Medical center director DeAnne Seekins has thanked the couple for alerting them to the problem, and said disrespecting veterans will not be tolerated.

“It is an honor to serve America’s heroes and actions that do not align with our core values will not be tolerated,” she said in a statement. “We pride ourselves on providing the highest quality care to the Veterans we serve and being responsive to our patient’s needs. Veterans deserve nothing less.”