Perez, Ellison and a unified front against Trump

"I don't belong to an organized political party. I'm a Democrat."—Will RogersOne would think that if anything could focus the minds of Democrats and prompt a unity of purpose across the political spectrum, all the way from the left to the far... 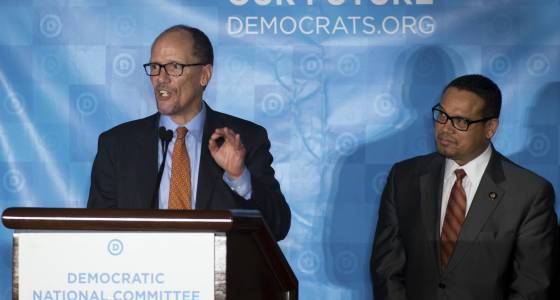 "I don't belong to an organized political party. I'm a Democrat."

One would think that if anything could focus the minds of Democrats and prompt a unity of purpose across the political spectrum, all the way from the left to the far left, it would be President Donald Trump. Yet days after Rep. Keith Ellison publicly embraced the man who defeated him for the party chairmanship, former labor secretary Tom Perez, backers of the Minnesota congressman are still grousing that the "establishment" had once again quashed the progressive wing of the party and threatening to take their bats and balls and go ... where, we're not exactly sure.

Let's get a couple of things straight. First, Mr. Perez is not a moderate or a centrist. He isn't a throwback to the Bill Clinton, third-way politics of the 1990s. He is a liberal, even by Maryland standards. He won a seat on the Montgomery County Council from Takoma Park (the Mid-Atlantic equivalent of Cambridge, Mass., or Berkeley, Calif.) as a liberal insurgent, and he ran in the same mold for attorney general before being forced from the race by a technicality. He has consistently viewed issues from housing to health care to the environment in terms of civil rights, and as a top deputy in the Obama justice department, he was on the front lines in the fights against restrictive voter ID laws and police brutality.

Second, it is not, nor should it be, the job of the Democratic National Committee chairman to set the direction of the party, and neither Mr. Perez nor Mr. Ellison (nor, for that matter, any of the other major candidates) proposed to do so. It wasn't right that the DNC under former chairwoman Debbie Wasserman Schultz tried to tip the scales during last year's presidential primaries against Sen. Bernie Sanders and in favor of Hillary Clinton (albeit in ways that probably didn't determine the ultimate outcome), and it would be equally wrong for her replacement to tilt the party toward one faction or another. Rather, what the party chairman needs to be doing is what both Messrs. Perez and Ellison promised to do (and what Mr. Ellison can help Mr. Perez do in his new role as deputy chair): help translate the grassroots energy Mr. Trump has inspired into quality candidates running for everything from city council to U.S. Senate seats. Republicans took over Congress in 2010 not because the Republican National Committee had a grand strategy but because the grassroots enthusiasm of the tea party movement led new candidates to run for office. Democrats can succeed, too, if they put aside for the moment debates about what the party should mean and instead play the hand they've been dealt.

Perez spoke on three political talk shows a day after he was a elected to lead a party struggling for direction and riven by...

Perez spoke on three political talk shows a day after he was a elected to lead a party struggling for direction and riven by...

This is not to say that big questions aren't hanging over the party. Before Mr. Trump's election, a demography-is-destiny theory held that Democrats' strengths among minorities and young voters would make them invincible, at least in presidential election years, as the nation grew more diverse. That's why the Clinton campaign put resources into traditionally red states like Arizona while neglecting states that proved vulnerable, like Wisconsin, Michigan and Pennsylvania. Even if 2016 proves to be an aberration on the way to a lasting, national Democratic coalition, the party still faces structural problems related to the way its voters are concentrated in cities and larger, more urbanized states — a circumstance that makes it easier for Republicans to hold Congress or, as has happened twice in the last generation, win the presidency while losing the popular vote. The party also needs to evaluate whether its policy prescriptions on economic and other issues speak to today's voters.

The Democratic Party put its faith in its old guard Saturday to guide it out of the political wilderness, choosing as its new leader an Obama-era Cabinet secretary over the charismatic congressman backed by the progressive wing of the party.

Tom Perez, a former secretary of Labor with strong ties...

The Democratic Party put its faith in its old guard Saturday to guide it out of the political wilderness, choosing as its new leader an Obama-era Cabinet secretary over the charismatic congressman backed by the progressive wing of the party.

Tom Perez, a former secretary of Labor with strong ties...

But those aren't questions a party chairman can answer. Want proof? Look to then-Republican National Committee Chairman Reince Priebus' post-mortem after Mitt Romney's loss in 2012. It called for radical changes to the party's message and policies in an effort to broaden the Republican base beyond white voters. Mr. Trump did precisely the opposite, and now Mr. Priebus works for him. The Democratic Party's future needs to be resolved through the emergence of elected leaders on the federal, state and local levels, and through the support of the voters, not by the choice of a chairman.

We recognize that many Sanders supporters believe that their candidate would have been stronger than Ms. Clinton and could have beaten Mr. Trump. Maybe they're right, maybe they're wrong. But not every question needs to be a re-litigation of that point. If the factions within the party insist on making it so, they risk proving another of Will Rogers' quips: "The difference between a Republican and a Democrat is the Democrat is a cannibal," the late humorist said. "They have to live off each other, while the Republicans, why, they live off the Democrats."