After one of the shortest outings of his major league career on Tuesday night in the Orioles’ ugly 9-3 loss to the Cincinnati Reds, right-hander Kevin Gausman said he needs to hit the film room.Gausman believes his unspectacular start to this season is... 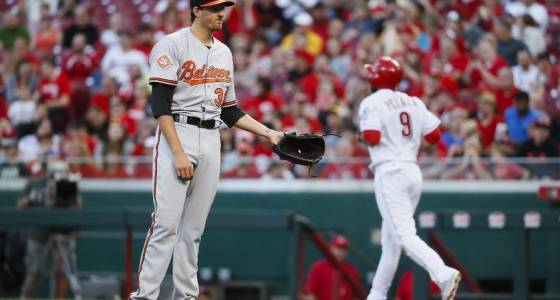 After one of the shortest outings of his major league career on Tuesday night in the Orioles’ ugly 9-3 loss to the Cincinnati Reds, right-hander Kevin Gausman said he needs to hit the film room.

Gausman believes his unspectacular start to this season is rooted in bad mechanics,  specifically his front hip coming open too soon, which is sending four-seam fastballs he’s intending to throw down and away back across the plate. And after being chased from the game after just 2 2/3 innings on Tuesday, his shortest outing in his last 38 major league starts, Gausman is prepared to do a lot of work to correct the problem before his next start.

"My ball is kind of coming back, and that’s why even when I’m throwing strikes – at least today and really the first two starts of the season, too --  the ball was kind of coming back to the middle of the plate,” Gausman said. “So that’s something I need to get back to, look at some video. … I think it’s something that has a lot to do with my front hip and I’m leaking a little too soon, so I think that’s why I’ve been a little sporadic, especially tonight.”

In the Orioles’ first interleague game of the season, Gausman allowed 13 of the 20 batters he faced reach base. He was battered for eight runs – tying his career high – while allowing eight hits, three walks and a hit batter.

“Overall today, it was just bad command, bad execution and getting myself in some holes,” Gausman said. "Yeah, it just wasn’t good.”

Gausman’s first four starts this season have been unspectacular. He has just one quality start over that span, and owns a 7.23 ERA. Opposing hitters are batting .325 (26-for-80) against him this season.

The Orioles arrived in Cincinnati having posted four straight quality starts against a floundering Blue Jays team -- a run started by Gausman’s best start of the season Thursday night in Toronto, where he held the Blue Jays to one run over six innings.

Gausman’s start Tuesday marked the first time he failed to get out of the third inning since a 2 1/3-inning outing against the Tampa Bay Rays on Sept. 2, 2015.

Gausman pitched effectively in his last start with strong fastball command, but on Tuesday, he struggled to locate his fastball, and the Reds make him play.

The big blow, however, was on Adam Duvall’s grand slam to left in the second inning, a hit that came when Gausman hung an 0-2 split changeup over the inner half of the plate and Duvall turned on it for his first career grand slam to fuel a five-run second inning for Cincinnati.

That put the Reds up 6-1, but they weren’t done beating up on Gausman, scoring another run on Tucker Barnhart’s RBI single. Jonathan Schoop’s relay throw home nabbed Scooter Gennett at the plate to end the inning.

Gausman would last just three batters into the third before receiving the hook from manager Buck Showalter after he allowed a two-out double to Jose Peraza on his 79th pitch of the night. But left-handed reliever Vidal Nuno immediately allowed a two-run homer to make the score 9-1.

“Yeah, it has a snowball effect on you, definitely,” Gausman said. “[You try to] slow down the game…It’s kind of like that thoroughbred mentality. Sometimes you want to go and go and go and you’ve got to be able to take your foot off the accelerator and hit the brakes sometimes, and slow the game down. That’s something I didn’t do. I was trying to almost throw through my mechanics and hoping that I would figure it out. I just didn’t make an adjustment.”

Gausman’s outing was rough from the beginning. He loaded the bases three batters into the game and was lucky to get out of the inning having allowed just two runs – coming on Duvall’s sacrifice fly and Zach Cozart’s RBI single.

“Yeah, it’s tough,” Gausman said about facing adversity from the start. “But you have to make quality pitches, and I was throwing the ball down in the zone, but a little too down in the zone and then sort of tried to bring it up and that’s kind of when I got hurt,” Gausman said. The biggest thing was, I don’t know how many times I got into 1-0, 2-0 counts. It doesn’t matter whether you’re facing an NL team or an American League team, if you kind of continue to put yourself in a hole, its going to come back to bite you eventually.”

Gausman said he’ll go through video of his second half performances last year, when he posted a 2.83 ERA over his last 12 starts.

“For a starting pitcher, it’s about making adjustments on the fly,” Gausman said. "You make a bad pitch; being able to be good enough to make the adjustment. Tonight, I wasn’t able to make the adjustment. I did on some certain hitters. I was kind of thinking that I was going to get the ball going, but I just didn’t make an adjustment quick enough. I’ll use my bullpen session this week and look at some video. I’ll figure it out. I’ll be all right.”

Three relievers accounted for 5 1/3 innings of relief, including both of the Orioles’ long relievers, Nuno and right-hander Tyler Wilson. Both threw at least two innings, meaning the Orioles would likely have to call up an extra relief arm from the minors to replenish the bullpen for Wednesday.

Jones barrels one up: If center fielder Adam Jones was feeling any repercussions of an ugly collision he had with the center field wall Sunday in Toronto, he didn’t show it.

Jones provided the Orioles’ only home run of the night, lining a 1-2 sinker from soft-tosser Bronson Arroyo into the left-field stands.

Jones, who has seemingly been playing more deep in center field in recent days, also flagged down a blooper into shallow center off the bat of Scooter Gennett in the fourth inning.

Arroyo held the Orioles to just one run over his first four innings before allowing Jones’ home run in the fifth.

Smith – who has performed well hitting in the leadoff spot against right-handed pitching this season, posting a .280/.357/.640 hitting line entering Tuesday’s game – also missed time this spring training with the same injury.

He missed 24 days with injury during spring training and was limited to just eight Grapefruit League games because of it. The Orioles were cautious with the injury because the team didn’t want the issue to linger into the season, as it did last season when Smith played for the Mariners.

Smith was replaced by Trey Mancini in left field.