Orioles prospect Dariel Alvarez is one of the dozen outfield prospects in camp this spring, and a lot will have to change over the next five weeks for him to climb onto the 25-man roster, which is why there has been speculation that the club might try to... 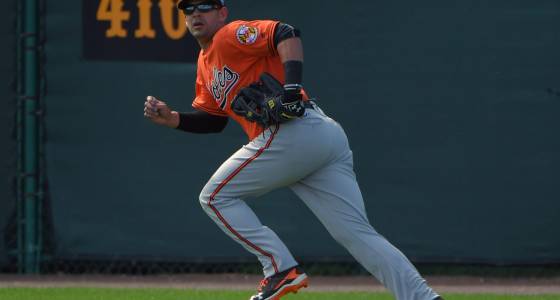 Orioles prospect Dariel Alvarez is one of the dozen outfield prospects in camp this spring, and a lot will have to change over the next five weeks for him to climb onto the 25-man roster, which is why there has been speculation that the club might try to convert him into a pitcher.

Alvarez has a terrific arm and he did pitch years ago in Cuba, but he said Saturday morning that he remains focused on being a hitter and outfielder.

"I'm grateful for the opportunity to be here and I think I have the chance to be here and compete," he said through interpreter Ramon Alarcon, "so I just want to stay healthy in order to compete."

He said the team has approached him about making the switch -- which was made recently and successfully by reliever Mychal Givens -- but he's not ready to do that.

"They have approached me about becoming a pitcher, but for the moment I'm a hitter," Alvarez said. "That's where my mindset is right now is to be a hitter. The things I've done so far are as a hitter, so I look at myself as a hitter right now."

Alvarez did pitch 22 games in Cuba over three seasons, according to Baseball-Reference.com. When asked what particular pitches he has in his repertoire, he said he throws a fastball, curveball and slider.

Givens made the switch and was 8-2 with a 3.13 ERA in his rookie season last year, but Alvarez said he has not talked to Givens about the transition.

"No, I have not spoken with him about it," he said. "Right now, pitching is not in my mind. That is something that has not crossed my mind yet."