Orioles outfielder Joey Rickard, currently on the disabled list with a left middle finger spring, won’t return when he’s eligible Wednesday, but Rickard believes he’s not too far behind. Manager Buck Showalter said Rickard is able to grip a bat and... 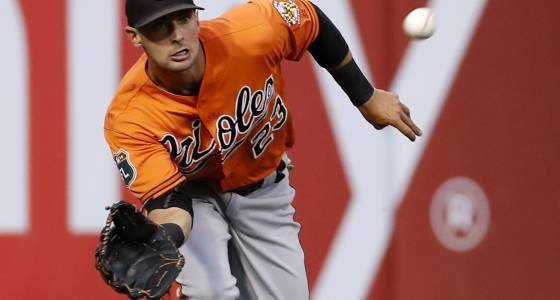 Orioles outfielder Joey Rickard, currently on the disabled list with a left middle finger spring, won’t return when he’s eligible Wednesday, but Rickard believes he’s not too far behind.

Manager Buck Showalter said Rickard is able to grip a bat and hold a ball, but Rickard said there’s still some stiffness and swelling in the finger.

“I haven’t started baseball activities, but we’re not too worried about that considering it’s only been a week or so since I’ve played in games,” Rickard said. “We’re just working on getting the strength back, getting the mobility back. As soon as that’s better, I think I’ll be ready to go.”

Showalter said that Rickard would likely need at least one minor league rehab game before he returns.

“If he stayed within that 10-day [window] where he was hitting with us after eight days, that would have been different,” Showalter said. “We might not have done it, but now that he’s going to spend the full 10-plus, I would think he’d need to take an at-bat, maybe a game or so at most. I’d probably lean towards that.”

Rickard injured his finger sliding into second base on a steal attempt April 8 against the New York Yankees.

Adjusting to NL rules not as difficult with bench depth: The Orioles had to sit rookie Trey Mancini’s hot bat Tuesday without a designated hitter in an interleague series in a National League park, but the club was more prepared for the nuances of an NL game because of its improved bench depth.

“I look at it like, in this format, everybody has the chance to play tonight,” Showalter said. “I don’t look at it like someone is starting or not. It gives us an advantage, unlike a lot of American League clubs. … You can do some things over the course of the game, especially with the way they’re using their pitching staff, just to match up with some things later on in the game.”

With everyday DH Mark Trumbo playing right field, shifting Seth Smith to left field, the Orioles went into Tuesday’s game with a strong bench that includes the hot-hitting Mancini, a left-handed on-base threat in Hyun Soo Kim, a speed and defensive upgrade in Craig Gentry and a multidimensional defender in Ryan Flaherty, all who could be used earlier in the game with pitchers hitting and lineups shuffling early.

“Like I told guys in the advance meeting, you’ve got to be ready because it could be the fourth inning. It could be the fifth inning,” Showalter said. “It could be the third inning. … I really like our options off the bench. And it’s not because you’re not expecting somebody not to do well who’s starting. It’s just that we can present some challenges for a bullpen that’s real deep. They’ve got 10 guys in their bullpen tonight.”

Asher’s next start uncertain: Showalter said the team hadn’t yet determined whether right-hander Alec Asher will start Saturday when the club next needs to fill its fifth starter spot.

Showalter indicated that the decision on Saturday’s game against the Boston Red Sox might not be made until after the Orioles finish their three-game series in Cincinnati.

Asher, who held the Blue Jays to one run on three hits over 6 1/3 innings Saturday in Toronto, could either start that game or move to the bullpen, Showalter said.

After Asher’s start, Showalter indicated that he would play matchups in deciding the fifth starter in the next term.

Around the horn: The stolen base credited to Blue Jays catcher Russell Martin in the ninth inning of Friday’s game in Toronto with Orioles closer Zach Britton on the mound was changed to catcher’s indifference. The earned run charged to Britton stays … Showalter said he wanted to keep right-hander Kevin Gausman on regular rest Tuesday, and said he will likely do the same with right-hander Dylan Bundy. … Center fielder Adam Jones was in the starting lineup Tuesday in the team’s first game since Jones has a scary collision with the outfield wall Sunday. Jones said he felt “great” before the game.