If you thought the most possible Oregon thing available on Earth was goat yoga, well, stop limiting your imagination. Now, Oregon's extremely popular goat yoga has its own official beer. Goat yoga, of course, is the ancient practice of asana with the... 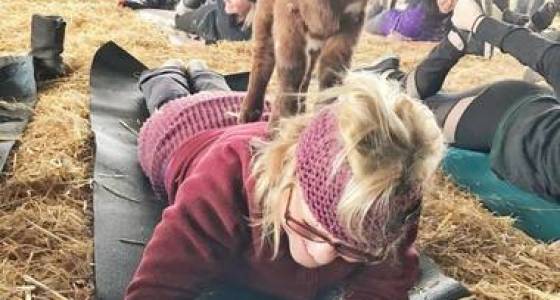 If you thought the most possible Oregon thing available on Earth was goat yoga, well, stop limiting your imagination. Now, Oregon's extremely popular goat yoga has its own official beer.

Goat yoga, of course, is the ancient practice of asana with the added benefit of happening amongst a herd of goats.

Goat Yoga Brett IPA is a collaboration between Yachats Brewing and Claim 52 Brewing. It will be released Wednesday at Loyal Legion in Portland.

"It's just called Goat Yoga," Lainey Morse, the owner of  No Regrets Farm, said of the beer Monday over email. "It doesn't actually have any goat hair or saliva in it!"

"They were just having some fun with it,"  she added, "and I thought it was awesome because A. I love beer and B. I love Goat Yoga!"

When asked whether the goats would make an appearance at Loyal Legion, she said sadly no. But, she said, there will be a bigger launch in Yachats in the future, and the goats will show up at that one. She doesn't have a solid date yet for that goat-beer-yoga extravaganza.

In January, we reported that Lainey Morse's goat yoga class had a waiting list of over 900 people.

On Monday, early sign-ups for classes in Corvallis to be held in late March opened to people on the waiting list. Morse said over email that on March 18, sign-ups would open to the general public.

Morse told us in January that goat yoga had taken over her life.

"I ended up quitting my job that I had for the past 10 years and I'm doing this full time now!" she said.

Due to zoning rules, Morse had to stop holding the classes at her farm. But she said she was working with Oregon State University to provide goat yoga on campus and was also working with Emerson Vineyards to do "Sunset Goat Yoga & Wine Tasting" on Saturdays and Sundays starting in the spring.

Goat yoga has become so popular, there's even a whole line of goat yoga yoga apparel.