STANFORD — Oregon survived its Bay Area trip by the slimmest of margins.Jordan Bell scored on a putback with 14 seconds left to give the sixth-ranked Ducks their second consecutive nail-biting victory in a rare Bay Area sweep as Oregon beat Stanford 75-73... 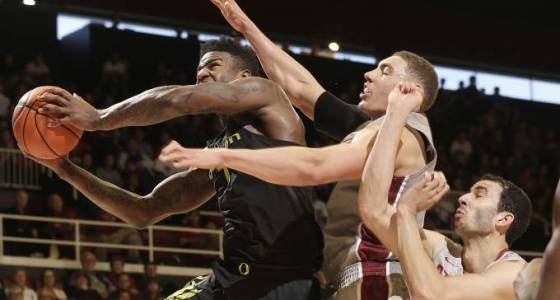 STANFORD — Oregon survived its Bay Area trip by the slimmest of margins.

Jordan Bell scored on a putback with 14 seconds left to give the sixth-ranked Ducks their second consecutive nail-biting victory in a rare Bay Area sweep as Oregon beat Stanford 75-73 on Saturday.

“It stresses Coach out,” guard Dylan Ennis said. “It shows us that we can just get gritty, get down and get the win. ... Hopefully if we’re down like that again we can fight back and do the same thing.”

Bell’s game-winner followed Dillon Brooks’ last-second, tiebreaking 3-pointer three nights earlier at Cal to give Oregon (26-4, 15-2 Pac-12) its second sweep of its conference Bay Area rivals since 1976. The other came two years ago.

“It’s been a tough road trip for us, two close games,” coach Dana Altman said. “That’s life on the road. We found a way.”

Reid Travis had 27 points and 14 rebounds to lead the way for the Cardinal (14-14, 6-10), but committed a turnover on the final possession to end any comeback hopes on a senior day that honored Christian Sanders, Marcus Allen and Grant Verhoeven.

“There’s a little extra when you see guys like Christian, Marcus and Grant shedding tears when they’re getting called up,” Travis said. “It’s the last time they get to compete on this court. ... Just looking at that, there’s no choice but to be motivated.”

Stanford trailed by as many as 12 points in the first half but battled back to tie the game five times in the second half. But it took until that fifth equalizer for the Cardinal to take their first lead since being up 9-8 early in the first half.

Travis’ jumper in the lane made it 71-69 with less than 3 minutes left but the lead was short-lived as Brooks hit a jumper at the other end to tie it.

The game was tied at 73 when the Ducks managed four offensive rebounds on one possession before finally converting on Bell’s shot with 14 seconds left. It capped a wild sequence that started when Ennis shot an airball on a 3-pointer.

Payton Pritchard caught the ball in the air and shot it to the rim before the shot clock expired. Bell was there to put back the second miss for the game-winner.

“It was going so fast I don’t even know what happened,” Altman said.

Travis lost the ball in the paint at the other end to seal the victory for Oregon.

Oregon: The Ducks capped a 7-1 February with just their second road sweep of the conference season as they peak at the right time of year. Their only loss in that span came on a late 3-pointer by Lonzo Ball in an 82-79 loss at UCLA. Oregon has one more road game left to finish the regular season at last-place Oregon State, and remains in contention for a Pac-12 title and a top-two seeding in the NCAA tournament.

Stanford: The Cardinal were unable to follow up home wins against Cal and Oregon State when faced by tougher competition from the Ducks. That has been an issue all season for Stanford, which fell to 0-8 against ranked opponents.