A South Side Easton resident and city firefighter were taken by ambulance for treatment following a house fire Tuesday night, officials said. Flames could be seen erupting from the front room of 324 E. Berwick St. The blaze was reported at 9:21... 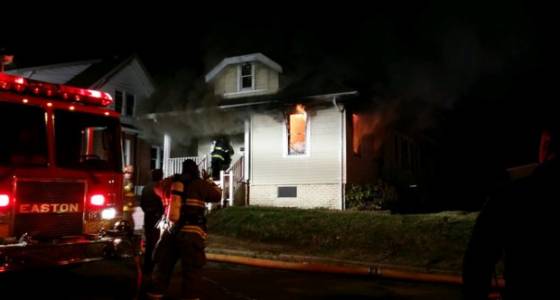 A South Side Easton resident and city firefighter were taken by ambulance for treatment following a house fire Tuesday night, officials said.

Flames could be seen erupting from the front room of 324 E. Berwick St.

The blaze was reported at 9:21 p.m., a Northampton County 911 dispatch supervisor said.

Initial information indicated someone may have been trapped inside the home, according to reports from the scene. That was unfounded, Easton fire Chief John Bast said from the scene.

As of about 10:15 p.m., firefighters were going room by room with a thermal camera to check for hot spots, said Mayor Sal Panto Jr., who lives nearby and also spoke from the fire.

The resident who was treated was a neighbor who attempted to extinguish the fire with a garden hose and inhaled some smoke, Bast said; the firefighter suffered a minor injury by stepping on a nail and was taken for a tetanus shot.

The fire remained under investigation, and further information was not immediately available.