Mount Prospect is filling in the last piece of the doughnut hole in its annexation of land in and around United Airlines property.It is working to annex 18 acres at the northwest corner of Dempster Street and Linneman Avenue. The property contains the 288-unit... 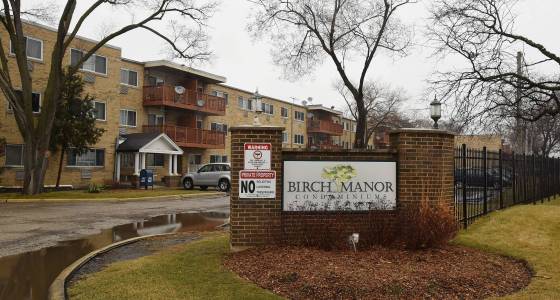 Mount Prospect is filling in the last piece of the doughnut hole in its annexation of land in and around United Airlines property.

It is working to annex 18 acres at the northwest corner of Dempster Street and Linneman Avenue. The property contains the 288-unit Birch Manor condominium complex, which consists of eight 36-unit buildings.

The village board this week began discussion of the forced annexation and found that the complex's residents are apprehensive about being absorbed into the village. Taxes, fire service and security are among their concerns.

Community Development Director William Cooney said the village staff met with the condo board in January. The village has tried to keep the residents apprised and held an open house at the RecPlex last week to explain services and programs.

Residents expressed concerns the annexation will lead to an increase in their taxes.

"I just want to tell you that we are not ready for it," resident Joanna Klimek said. "Unfortunately, we can't vote for it. We all feel like we are stuck."

Cooney told them they will likely see a 7 percent property tax increase, amounting to $55 on average, the result of adding the library rate. He said they will no longer pay taxes to the Elk Grove Rural Fire Protection District, but the addition of the village's rate will offset that. Since the Cook County sticker is $85 and the village's is $45, the overall impact of the annexation will be a wash, he said.

"Those are not there," he said. "We're not quite sure why the rural fire protection district did not require them."

That all came as a surprise to residents like Lawrence Kahn.

"So we kind of need some information on how much that will cost, how we can spread that out and why in the first place we weren't compliant with a standard that Cook County and the village would have had in the first place," he said.

Trustee Richard Rogers, who had the experience of being annexed into the village, offered reassuring words.

"Like you I was concerned. Were my taxes going up? What was it going to cost?" Rogers said, adding he discovered the value of such village services as the maintenance of parkway trees and the library.

One resident noted safety has been an issue, to the point where residents are paying for extra security.

He added the department has a unit devoted to gang enforcement and officers focused on drug enforcement. He said officers will do regular patrols and will get out of their cars to walk through the complex.

A final vote on the annexation will occur at an upcoming village board meeting.