Mother of mentally ill woman killed by Cleveland police: 'This is not the last you're going to see of me'

CLEVELAND, Ohio -- The family of Tanisha Anderson said Monday that while it reached a $2.25 million settlement with the city of Cleveland over the 37-year-old's November 2014 death, their fight for what they see as justice is far from over. Cassandra... 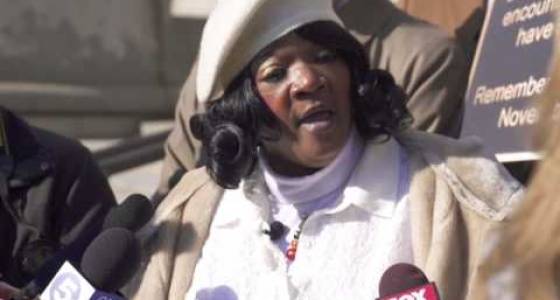 CLEVELAND, Ohio -- The family of Tanisha Anderson said Monday that while it reached a $2.25 million settlement with the city of Cleveland over the 37-year-old's November 2014 death, their fight for what they see as justice is far from over.

Cassandra Johnson, Anderson's mother, wants to ensure people with mental illness do not suffer the same fate as her daughter.

"This is not the last you're going to see of me," Johnson said on the steps of City Hall. "I'm going to continue to fight for the rights for all mentally ill. I can't bring Tanisha back, but there are more, many, many more, that need this kind of help, and my goal is to do that."

Johnson and Anderson's family spoke at a news conference Monday morning to discuss the settlement.

(You can watch the full news conference at the bottom of this post.)

Anderson suffered from schizophrenia and bipolar disorder and was suffering from a breakdown when her family called police to its home on Ansel Road in November 2014. She died after officers Scott Aldridge and Bryan Myers cuffed her hands behind her back and placed her in the back of a police car following a struggle.

One of the officers used a take-down move on her as she stepped out of the car. He placed his knee on her back and placed her in handcuffs before she stopped moving, Anderson's family has said.

The Cuyahoga County Medical Examiner's Office ruled her death a homicide and said she asphyxiated while being restrained in a prone position. Obesity and other health factors also contributed to her death, the office said.

The settlement was reached after more than two years of litigation. It is one of the largest the city ever reached in a police misconduct case.

Aldridge and Myers are the subject of an ongoing criminal investigation by the Ohio Attorney General's Office.

Tanisha Anderson's 18-year-old daughter Mauvion Green said she misses her mother every day, but knows she is still out there.

"I'm going through my high school years without a mother," Green said. "And it's been hard, but I get through, because I know she's looking down on me and she's supporting me in every way."

The family and its lawyers stood on the steps of City Hall in front of a blown-up photo of Anderson. The family also displayed a plaque it's asking the city to hang at the police department to recognize Anderson's death.

Johnson and the family are also asking for the police department to carry out an order on how to prevent the sort of positional asphyxiation that killed Anderson. They also want the department to use Anderson's case as an example during training.

None of these changes are believed to be in the settlement. When asked if the family expected these changes to be made, Johnson said, "we pray that it does. Because it would change the world."

Michael Anderson, Tanisha Anderson's uncle, also said a foundation would be started in his niece's name to help those seeking journalism and criminal justice degrees. He said it is up to the family whether any of the $2.25 million settlement would go into the foundation.

"But as far as I'm concerned, any dime that comes across my hands is going into that fund," Michael Anderson said.

For now, though, the focus is pushing prosecutors to criminally charge Aldridge and Myers. Both face internal discipline, though it is on hold while the criminal investigation continues.

Johnson said she would like to see the officers go to prison.

"The police are supposed to serve and protect. That's not going on these days. I'll tell who you they're serving and protecting: themselves," Johnson said.

Green said she witnessed her mother's death and said she now knows the severity of the officers' actions.

"At the time, I really didn't know what was going on, but now I do," Green said. "I'm much wiser now, and that's only because of her. She made me wise."

If you would like to comment on this story, please visit Monday's crime and courts comments section.