Famagusta 10°
clear sky
BUSINESS EDUCATION ENTERTAINMENT HEALTH POLITICS SCIENCE SPORTS TECHNOLOGY
10:22 Four Benefits of Hiring a Dedicated Development Team
04:48 Mark Kelly, President of Safety Marking Inc., Discusses Structuring Effective...
17:58 Trump wants to play golf at the Biden swearing-in in Scotland - but is...
17:54 First doubts Regarding tightened Steps: two National Countries Extract...
10:39 Covid-19 : in France, the end of containment and entry into force of the...
04:34 The schools of Rome will use the Internet with light bulbs: what it is...
10:58 Kratom Tea: How Is It?
11:46 Office Furniture Products for you!
12:17 Top Clubs, Their Value, Revenue And Current Standings
11:14 Reasons Why Rewarding Yourself is a Good Practice
BIST
1542
GOLD
442.513
USD
7.3985
GPB
10.1641
EUR
9.0105
Breaking News
Online Etiquette Rules for Managing a Virtual Business
Close

White ribbons with the words peace, hope, love, celebrate diversity flutter in the cold breeze along Roncesvalles Ave., tied to poles and trees. After last month’s shooting at a Quebec mosque that left six people dead, and other events around the world... 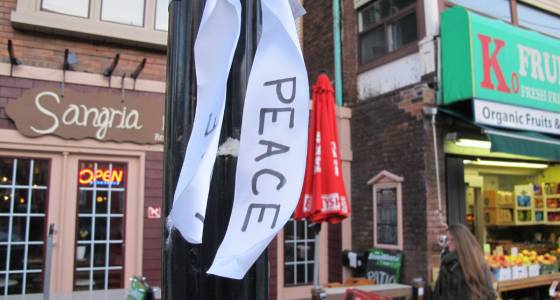 White ribbons with the words peace, hope, love, celebrate diversity flutter in the cold breeze along Roncesvalles Ave., tied to poles and trees.

After last month’s shooting at a Quebec mosque that left six people dead, and other events around the world targetting minority groups, some Roncesvalles-area residents decided to make their neighbours feel more welcome with the white ribbons.

“There is something happening in the world right now,” said Sara Krynitzki, one of the first residents to put up a ribbon.

Krynitzki said her neighbour told her about a Muslim mother who wears a hijab who was afraid to even walk out of the house after the Quebec shooting. But seeing those white ribbons one morning made her day.

While there has always been hate and violence in the world, Krynitzki said she believes the election of U.S. President Donald Trump brought those emotions to the forefront and has almost made it socially acceptable.

“I think it’s very scary and really dangerous,” she said.

There’s something about this uprising and hate that is making her very nervous and scared, Krynitzki said.

So, among the other things she does to make the world “less dark” is to put up a white ribbon with handwritten words of harmony. She hopes these ribbons, almost looking like white-winged doves, will make a difference to simply just one person and brighten their day.

It’s done just that, according to passersby the Star spoke to this week.

These messages in black marker certainly make the area feel friendlier, said Monique Munoz, who lives around the area.

Area resident Jeff Churchill said it’s times like these that bring out the best in people.

“It’s always nice to have a little bit of positivity when you walk home, eh?” Churchill said.

It’s important to unite and take a stance against the hate that is spilling over, said Samaza Murava, another Roncesvalles-area resident.

While others have joined in tying white ribbons, almost all say they are hard to see.

“Part of the problem is nobody knows where to get such big ribbon from,” said Krynitzki.

Some people have even used shower curtains, she said.

Whether shower curtains or white satin sashes, the message remains the same.