The Maryland Zoo's newest residents are a rowdy pair, tackling and pawing at each other, digging up a magnolia and dragging around an old Christmas tree.Two female grizzly bears, orphaned youngsters from the wilderness of Montana, have moved in. They are... 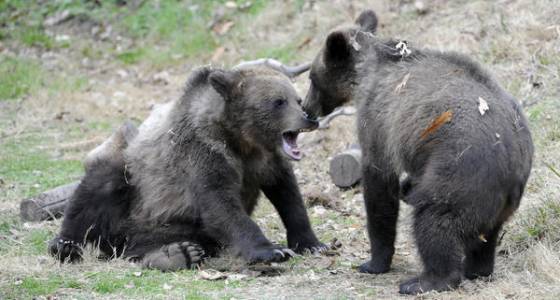 The Maryland Zoo's newest residents are a rowdy pair, tackling and pawing at each other, digging up a magnolia and dragging around an old Christmas tree.

Two female grizzly bears, orphaned youngsters from the wilderness of Montana, have moved in. They are the first grizzlies ever to live at the Baltimore zoo.

It wasn't an easy transition. They were found tiny and crying in an apple orchard in August, just months after emerging from the den with their mother. She was found shot and had to be euthanized.

By the time Baltimore zookeepers were ready to pick the sisters up, heavy snow and frigid temperatures made for a treacherous journey to their new home.

After months of rehabilitation and adjustment to their new surroundings, the curious and playful pair is set to make its debut Thursday.

"We're all pretty excited," said Ellen Bronson, the zoo's senior veterinarian. "It's nice to have some young animals. They're going to be young for a while."

They arrive just in time for the zoo's busy season — starting Wednesday, it is open daily again and will soon greet throngs of schoolchildren and vacationers. More than 400,000 people come to visit the attraction's 1,500 animals each year.

The bears were found on the Flathead Indian Reservation of northwest Montana, and biologists with the Confederated Salish and Kootenai Tribal Wildlife Management Program learned that their mother had been badly wounded. The smaller of the two cubs had also been shot — likely in the same incident — with four pellets lodged in its jaw and chest.

They were taken to a wildlife rehabilitation facility 150 miles away in Helena, a temporary home while officials searched for a zoo to adopt them permanently.

"We waited and waited and finally the Baltimore zoo said, 'Yeah, we can take them,'" said Ron Aasheim, a spokesman for Montana Fish, Wildlife and Parks.

For the zookeepers here, it wasn't a difficult decision. The facility has a long history of working with polar bears and has also been home to Kodiak bears. The "Polar Bear Watch" exhibit, which includes two separate pens with pools, opened in the early 2000s to replace a bear facility that dated to 1942.

Opportunities for new polar bears are rare — they could only come via breeding programs in the United States, said Mike McClure, the zoo's general curator. So officials had already discussed whether to welcome other types of bears should the chance arise, he said.

With a wealth of bear experience among the zoo's veterinarians, keepers and management, they were quick to welcome the young sisters.

"It was exciting to be able to give a home to animals that would not have had a home otherwise," Bronson said.

She and McClure headed to Montana in December — just in time for a major snowstorm to hit. They were stranded for five days, and with another storm incoming, had only a short window to get the bears into crates and onto a truck headed eastward.

"It was very touch and go in a couple spots," McClure said. "I've never done an animal transport quite like it."

A zoo patron with an affinity for bears provided $15,000 to defray the costs, and a Montana group dedicated to limiting conflict between humans and animals provided another $1,200.

They arrived a few days before Christmas and were kept in quarantine a month. Though the smaller bear had been shot, both it and its big sister were resilient and healthy, Bronson said.

They have grown from weighing about 30 pounds and 50 pounds when they were found to about 150 and 200 pounds, respectively.

The zookeepers had to make only minor adjustments to welcome them. The new guests don't like swimming as much as polar bears do, so the water in their pool has been lowered to just a couple feet to splash in.

They need a steady rotation of logs and branches to play with, and zookeepers routinely have to fill in holes they dig. They pawed their way deep enough to unearth the root ball of a magnolia tree and through eight inches of dirt and mulch to expose a buried stormwater drain.

"It's a pretty fun challenge," McClure said. "It's fun to watch them learn to be bears."

They munch on a diet of apples and berries, just like they would in the wild. In their second year of life their mother would have taught them to hunt, but instead zookeepers feed the omnivores beef.

As they grow and learn over the next couple of years, "they have each other, which is really important," Bronson said.

Zoo officials are in the process of planning a social media campaign to choose names for the sister bears, perhaps from the native tongue of the tribal lands on which they were found.

But for now, their names are simple: Big Bear and Little Bear.