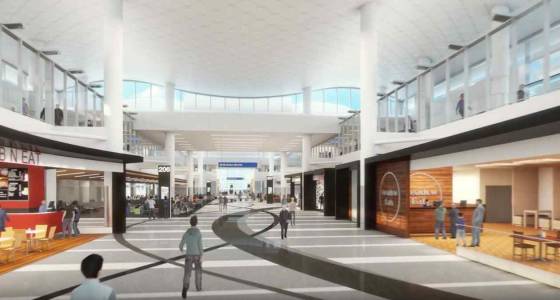 Mayor Eric Garcetti and other city leaders helped break ground on the 750,000-square-foot Midfield Satellite Concourse, which will connect to the Tom Bradley International Terminal via a 1,000-foot underground tunnel.

“LAX means so much to L.A.’s economy -- it’s an incredible job creator that employs more than 50,000. A record 47.3 million tourists visited our city last year -- that’s why we’re investing billions to make it one of the premier airports in the world,” Garcetti said.

“The Midfield Satellite Concourse is a transformational project that will put thousands of people to work and help extend L.A.’s worldwide reach even further,” he said.

The terminal will include 12 gates and a new baggage system, as well as restaurants and stores.

“LAX is quickly becoming the world-class airport that Angelenos demand and deserve,” said Councilman Mike Bonin. “I am especially excited that the Midfield Satellite Concourse will incorporate a number of sustainability features, such as using passive daylight lighting for the interior spaces, water-saving plumbing fixtures and a cool roof that reduces heat absorption.”

Garcetti’s office said construction of the terminal -- which is slated to be completed in 2019 -- is expected to create 6,000 jobs, produce more than $300 million in direct wages and enable LAX to add flights while relieving congestion at other terminals.

“As chair of the committee that oversees LAX, I am thrilled to help to help break ground on a project that will help transform our airport into the state-of-the-art, environmentally friendly, amenity-filled and beautiful facility it needs to be,” said Councilman Bob Blumenfield, chair of the City Council’s Innovation, Grants, Technology, Commerce and Trade Committee. “The Midfield Satellite Concourse project will employ thousands and benefit millions.”