KENT, Ohio -- Kent State won its fourth straight game with a come-from-behind 70-67 victory over Ohio University Saturday evening in the M.A.C. Center. The Flashes have now come through the MAC's Murderers Row of Akron, Buffalo and OU without a loss to sit... 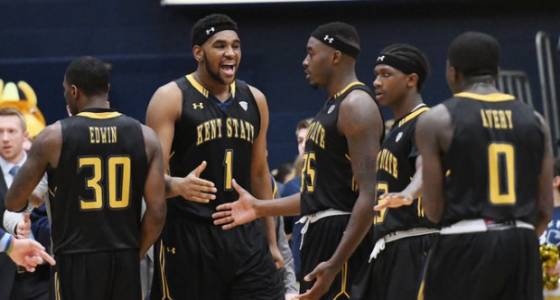 The Flashes have now come through the MAC's Murderers Row of Akron, Buffalo and OU without a loss to sit at 17-12, 9-7.

"We got together before Akron and said, This can be the start of a wonderful story, a wonderful journey,'' Kent sophomore guard Jalen Avery said.

The Flashes now find themselves tied with four teams for third place in the overall MAC standings with Ball State, Buffalo and Western Michigan.

It took some strong free throw shooting down the stretch by Kent, tenacious rebounding throughout, and cutting a gaggle of first-half turnovers down to one after the break to pull out the victory.

"The biggest thing is we stuck together,'' Kent coach Rob Senderoff said.

Deon Edwin led Kent with 20 points and 18 rebounds. Teammate Jimmy Hall had 20 and 10 with Avery scoring 12 points. The Bobcats were led by by Mike Laster with 16 points off the bench.

The first half: Kent State's season-long challenge with turnovers reared its head in the first half against the Bobcats. The Flashes had nine miscues at the break, which helped OU take a 35-27 halftime lead.

The Bobcats got 12 points out of swingman Mike Laster off the bench and went on an 11-2 run inside the final four minutes of the half. The Bobcats were held to 35.7 percent shooting to Kent's 44.1 percent, but the 9-3 difference in turnovers was a big plus for Ohio.

Next in line: Kent State plays at Bowling Green, 7 p.m. Tuesday night, in its last road game of the season. The Falcons defeated Kent the last two times they played, both games at Kent, including 84-83 in overtime on Feb. 7. KSU then ends the season at home, 9 p.m. Friday against Akron. The Bobcats return home for their final two games of the season, starting 6 p.m. Tuesday night against Buffalo before ending the season, Friday night, against Miami.