WESLEY CHAPEL — One day three years ago, retired Tampa police captain Curtis Reeves sat in seat No. 9 of theater No. 10 of the Cobb Grove 16 cinemas. As previews rolled, he fired a gun during an escalating confrontation over a cellphone. 6 Months Ago2 Days... 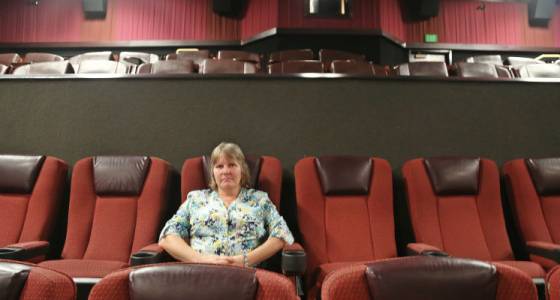 WESLEY CHAPEL — One day three years ago, retired Tampa police captain Curtis Reeves sat in seat No. 9 of theater No. 10 of the Cobb Grove 16 cinemas. As previews rolled, he fired a gun during an escalating confrontation over a cellphone.

On Friday, a circuit court judge sat in seat No. 9, and for her benefit, the same previews rolled, starting with Sabotage.

The fifth day of a high-profile "stand your ground" hearing opened at the movies before returning to Dade City's judicial center for an afternoon of testimony. Reeves, charged with second-degree murder in the death of Chad Oulson, 43, did not attend the outing, but attorneys did, and so did Pinellas-Pasco Circuit Judge Susan Barthle.

Dressed in ordinary street clothes, a colorful top and black slacks, she leaned forward in the seat as Reeves had done that Jan. 13, 2014. She pushed on the back of it. She looked at the floor, down the aisle, stood and surveyed the back of the theater. She saw the video cameras that had captured the scene.

"Is that the door that Ms. Turner came in?" she asked.

Answers came from attorneys who sat around her. Moviegoer Joanna Turner was one of the witnesses who testified earlier in the week.

"And the ex-boyfriend jumped somewhere down here?"

"And the witnesses were kept over in that area?"

At the start of Sabotage, the sound wasn't working. Reeves' attorney, Richard Escobar, had the theater put it at a precise setting in an apparent attempt to replicate theater conditions from the day of the shooting. It was loud enough to make conversation difficult.

Lights were dim. The auditorium smelled as though it had been recently cleaned.

News reporters watched from an upper level, the cinebistro, taking notes. Theater operators had objected to public or media attendance. An attorney for the Tampa Bay Times intervened, and after a short delay Friday morning, journalists were permitted to chronicle the event.

By 1 p.m., the judge was back in her robe and back on the bench, the theaters returned to moviegoers.

Dr. Vernard Adams, a former chief medical examiner for Hillsborough County, testified as an expert witness about the injuries that the Oulsons and Reeves suffered the day of the shooting.

Early in his testimony, the defense displayed photographs of Oulson's chest. A red, triangular gunshot wound marked the area over his heart.

Nicole Oulson, who has sat in the front row of the courtroom through each day of testimony, wept as the photos were shown. She dabbed at her eyes with tissues. Her attorney, T.J. Grimaldi, put an arm around her shoulders. Barthle glanced in Oulson's direction a few times.

The doctor estimated that Chad Oulson's right hand, which was grazed by the bullet, was about 10 inches from Reeves' gun when the shot was fired.

He described how the bullet swept over Chad Oulson's right wrist before slicing open Nicole Oulson's left ring finger. It broke through Chad Oulson's chest, penetrated his heart and stopped in his right lung.

Attorney Dino Michaels asked Adams a series of questions about areas of the human body that are most vulnerable to injuries from a strike, and what injuries could result. He asked if an iPhone could cause fractures and other injuries to the face. The doctor said it could.

He asked about redness visible near Reeves' left eye in photographs taken after his arrest. Adams said the redness could have been caused by an iPhone, but there is no way to determine it definitely was.