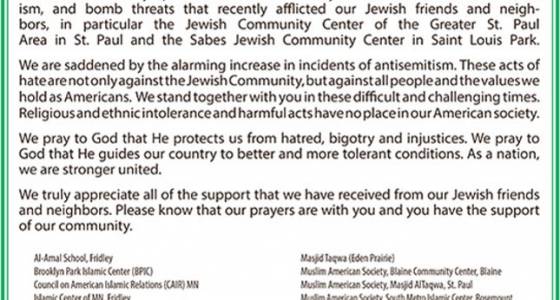 Leaders of various Muslim organizations in the Twin Cities say they are praying and extending sympathies to Jews affected by various bias-inspired acts carried out recently, including bomb threats targeting Jewish community centers in St. Paul, St. Louis Park and around the nation.

The message was delivered Friday in a half-page advertisement on the back of the local news section of the Star Tribune.

Law enforcement searches turned up nothing suspicious, but the people who use the centers for everything from classes to day care to fitness activities have been unnerved by the threats.

“We extend our sincere sympathies over the cowardly acts of hate, criminal vandalism and bomb threats that recently afflicted our Jewish friends and neighbors,” the newspaper ad read, pointing to the threats in St. Louis Park and St. Paul in particular. “We are saddened by the alarming increase in incidents of antisemitism. ... We stand together with you in these difficult and challenging times.”

Steve Hunegs, executive director of the Jewish Community Relations Council of Minnesota and the Dakotas, called the ad “a beautiful expression of solidarity. … Given the time of trouble in both communities, there is a certain symmetry” with what Muslims and Jews in the United States are going through.

The ad went on to point out that the various Muslim groups “appreciate all of the support that we have received from our Jewish friends and neighbors. Please know that our prayers are with you and you have the support of our community.”

Muslim institutions in Minnesota and around the country have for years been targets of anti-Islamic acts, including arson against mosques, property damage and graffiti.

A total of 22 Muslim organizations were listed below the message in the ad, including the Council on American Islamic Relations of Minnesota and various mosques, schools and community centers throughout the Twin Cities.

The Star Tribune declined to disclose the specific entity that bought the ad or how much it cost. Steve Yaeger, the newspaper’s chief marketing officer, did say that advocacy groups and other nonprofits pay a reduced rate for ads.