CLEVELAND, MINN. – In a town of 715 people, in a school that houses preschoolers to high schoolers under one roof, there’s a band program that would be the envy of many a big-city school.Nearly 90 percent of the students in grades six through... 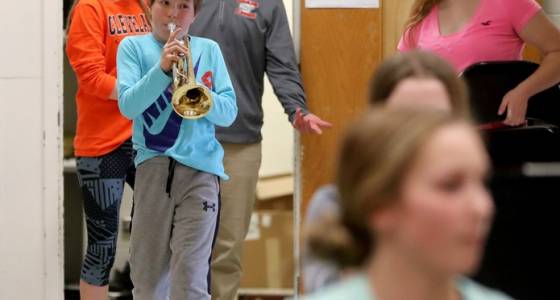 CLEVELAND, MINN. – In a town of 715 people, in a school that houses preschoolers to high schoolers under one roof, there’s a band program that would be the envy of many a big-city school.

Nearly 90 percent of the students in grades six through 12 play in the Cleveland Public School band — some 250 kids in all. The school boasts four separate concert bands and seven jazz bands. When the larger ensembles get together for practice, the band room is so crowded that some of the students are forced to play in the hallway outside.

“When we have a concert somewhere else, and the curtain goes up and the whole place is filled with band players, there’s a gasp that goes out,” said Jaci Kopet, head of the school’s combined athletics and music booster club.

Band is thriving in Cleveland at a time when music education across Minnesota is on the decline. Educators blame much of that statewide drop-off on the heavy emphasis on academic test scores, which they say has led to cutbacks in music instruction.

From 2006 to 2014, the number of K-12 music educators in Minnesota public schools dropped by 7 percent and the number of band directors by 11 percent. Meanwhile, the number of licensed teachers overall rose by 4 percent, according to Mary Schaefle, executive director of the Minnesota Music Educators Association.

“Arts education is under significant pressure, while investments happen in other areas,” Schaefle said. Erik Hermanson has directed Cleveland bands for the past 22 years, and his work has been described as “a sort of magic.” For more photos, visit startribune.com/galleries.

The loss of music educators is “a chipping away,” added Laura Sindberg, director of undergraduate studies at the University of Minnesota’s School of Music.

Music enriches the soul, Sindberg said, “and you can’t measure that in a test. But I know it’s there. You can see it.”

In Cleveland, where the nine-man football team finished second in the state last year, it’s the band that most unites the students — and the town.

“It brings the whole school together,” said Suzan Hollerich, whose youngest son won a college music scholarship after playing in the Cleveland band. “And the community is so proud.”

Megan Peterson, the school counselor, said the band provides an identity for kids during a sometimes tumultuous time of life.

“No matter what you’re involved in, whether you’re an athlete or a top student or you come from a troubled family — when you’re in the band room, that’s your place,” she said.

At the center of this small-school phenomenon is Erik Hermanson, 46, Cleveland’s band director for the past 22 years.

When Hermanson came to town after graduating from nearby Gustavus Adolphus College in St. Peter, Minn., only 19 students in grades nine through 12 played in the high school band. Today, 143 perform.

“I just kept recruiting, plugging away,” Hermanson said. “The great thing now is, the football players are in the band, the homecoming queen is in the band. You don’t have those cliques.”

Hermanson ought to know — he’s also the co-head football coach. His quarterback, Carter Kopet (Jaci Kopet’s son), holds the state high school record for most career touchdown passes. But in the band room, Kopet is just another trumpeter. An all-star lineman plays tuba, and the hockey team captain plays trombone.

Hermanson’s band practices are run with the brisk efficiency of a fast-paced athletic drill. But Hermanson is no hard-nosed screamer.

Constantly on the move, he hops onto the director’s podium one minute, then belts out a passage on his orange trombone the next. Smiling, pointing, sometimes grimacing, he offers a steady stream of instruction and encouragement.

“Trumpets and trombones, that was awesome,” he booms. “Sounds like everybody nailed it.”

“Ethan, do your parents come to the concert? Your grandparents? ’Cause they would have loved to hear that,” he calls out to a drummer after a successful solo.

As one group of players packs up its instruments, the next group streams in. Hermanson said his aim is to keep everyone busy.

In some ways, he said, conducting a band is no different from coaching a football team.

“We come every day,” he said. “We do our work. And we’re rewarded at the end because we’re prepared.”

A charismatic director is critical to building a successful music program, said Sindberg.

“The teacher/conductor is, pardon the pun, instrumental in the program,” she said. But support from principals and administrators is also essential, she added.

Brian Phillips has been with the Cleveland School District for 20 years, the first 10 as principal and now as superintendent. Hermanson, he said, “works a sort of magic with the kids.” And in Phillips’ view, the band is as important to the students as any class.

“In this country, the No. 1 thing we’ve done wrong is overemphasizing test results,” he said. “We never wanted to emphasize test scores at the expense of taking out things that develop the whole student.”

Ironically, music actually may be one way to improve test scores. A study at San Francisco State University found that elementary students who learned fractions through a music-based curriculum scored 50 percent higher on math tests than students who didn’t.

A study in the scientific journal Nature found that low-income children in Rhode Island who took a skill-building music course showed marked improvement in reading and math skills.

Music also is a vehicle for teaching children how to manage their emotions, said Mike Moeller, band director at Mahtomedi High School and president of the Minnesota Band Directors Association.

“We get to teach emotion every day,” he said. “We give students a channel for healthy reflection. You learn as a student of music not only about bettering your own skills, but how to work within a group with many different levels of abilities and interest.”

On this February day, the teachers and administrators in Cleveland are still shaking off their disappointment over the rejection, by district voters, of an $18 million bond issue that would have added 11 new classrooms to the school, as well as a gym and a new band room.

But bond issues aren’t on the minds of the teenagers who fill the cramped band room with energy and exuberance.

Packing up her trumpet, 14-year-old Macey Ziebarth said she couldn’t wait to join the band as soon as she became eligible in the sixth grade.

“Everyone plays in the band, so it makes you fit in,” she said. “It brings everyone closer together.”