Underneath a 10-foot high arch of purple and white balloons, hundreds of mourners Saturday packed a South Side church and poured past the open white casket of 11-year-old Takiya Holmes, who was shot and killed earlier this month during a violent stretch of... 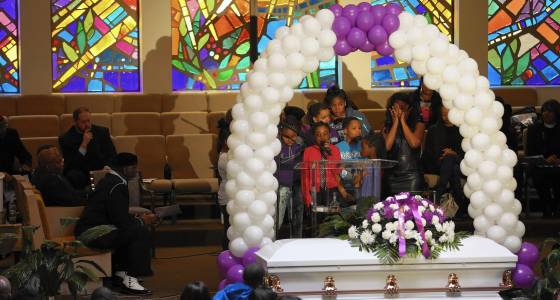 Underneath a 10-foot high arch of purple and white balloons, hundreds of mourners Saturday packed a South Side church and poured past the open white casket of 11-year-old Takiya Holmes, who was shot and killed earlier this month during a violent stretch of gun violence in Chicago that also claimed two other young children.

On the altar of the Life Center Church of God In Christ on South Indiana Avenue, Takiya was dressed in purple and white — her favorite colors — surrounded by purple and white flowers and bookended by two easels with photographs showing the smiling child in happier times.

At the end of the service, Takiya's mother, Naieekia Williams, dressed in black and standing at her daughter's casket to say her final goodbye, began to shiver and tremble in grief as funeral workers closed the lid of the white casket.

"My baby," she cried out. But as Williams fell forward, her cries filling the church, dozens of relatives standing behind her all lurched forward in unison to catch the woman, then held her like a living cocoon.

The hour-and-a-half service swung from emotional highs and lows, as Takiya's classmates, relatives, friends and visiting clergy recalled the young girl who was both a typical child and one who showed maturity beyond her 11 years.

Takiya had been her mother's "miracle child" after doctors told a teen-aged Naieekia Williams that she would never conceive children, said Takiya's cousin, Rachel, reading from the written obituary. The popular little girl loved the girly Batman "Harley Quinn" character and was protective over her little brother, Jakari.

One of the service's most fiery moments came early when the Rev. Cary Gidron, who eulogized a 12-year-old Kanari Gentry-Bowers on Friday night, lashed out at what he called a lost younger generation who lacked strong parents and a strong will to stay away from violence that hurts young children.

Classmates, family and friends of Takiya Holmes, 11, who was shot Saturday, Feb. 11, and died from her injuries on Valentine's Day, remember her during her funeral services at Life Center church, on Saturday, Feb. 25, 2017.

Classmates, family and friends of Takiya Holmes, 11, who was shot Saturday, Feb. 11, and died from her injuries on Valentine's Day, remember her during her funeral services at Life Center church, on Saturday, Feb. 25, 2017.

"We keep telling these families over and over again, it's going to be alright. And I've got to be honest with you — excuse my (language) — but how in the Hell is it going to be alright when you keep killing babies?" Gidron said to rousing applause.

Gidron challenged the audience to look inwardly when deciding who to blame for rampant violence troubling communities.

"I'll tell you when it's going to be alright: When GDs (Gangster Disciples) become God's disciples and when BDs (Black Disciples) are blessed and delivered and when Vice Lords get their vice from the Lord."

The fifth grader at Schmid Elementary School was inside a van parked near the Parkway Gardens complex in the 6500 block of South King Drive with her 3-year-old brother, her mother and her aunt on the evening of Feb. 11 when authorities said a reputed gang member of the O-Block faction of the Black Disciples gang fired at least a dozen gunshots on three gang rivals selling pot near the van. The shots missed the intended targets, but entered the van's rear passenger window, hitting Takiya in the right temple.

Takiya was rushed to Comer Children's Hospital a mile and a half to the north, where she was taken off life support three days later. Following her death, seven of Takiya's organs were donated to six people, including a relative who received one of her kidneys.

Takiya's grandmother, Patsy Holmes, told the overflow crowd that the receipients of the organs were doing just fine after the various transplants.

During the service, at least one visiting clergyman praised community activist Andrew Holmes, a relative of Takiya's, who worked with Chicago police and eyewitnesses to help identify the alleged gunmen, Antwan James, who turned himself in to police and currently faces murder charges in the girl's slaying.

On the same day Takiya died, two other children, Kanari and 2-year-old Lavontay White Jr., were shot and killed in separate shootings in the city.