Loveland-based Green Ride Colorado will take over airport shuttle service in Fort Collins and Loveland from SuperShuttle, the two companies announced Monday.The news comes on the heels of SuperShuttle's discontinuation of its shared-ride service between... 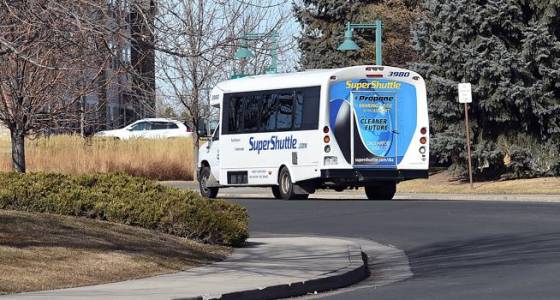 The news comes on the heels of SuperShuttle's discontinuation of its shared-ride service between Denver International Airport and Greeley and Longmont in recent months.

"Everybody agreed on both sides of the equation that there wasn't enough business for both companies," said Margaret Nathan, a spokeswoman for Scottsdale, Ariz.-based SuperShuttle.

Green Ride will offer service to DIA from the Harmony Transfer Center in east Fort Collins and the Loveland shuttle stop near the Hampton Inn — 18 stops a day at each location — as well as pickup at its current headquarters at the Northern Colorado Regional Airport in Loveland and at homes and hotels in Fort Collins, Windsor, Wellington, Timnath and Loveland, according to Ray Schofield, who co-founded Green Ride in Fort Collins in 2009.

SuperShuttle, which serves 38 airports in the United States and eight in other countries, will continue to serve the Denver-Boulder market with its shared-ride, ExecuCar and zTrip taxi services, the release said.

Green Ride has been gearing up for the expansion by hosting hiring events and conducting interviews with SuperShuttle employees, the release said, and plans to offer 20 to 25 new positions as a result of the expected increase in demand.

Schofield said Green Ride's deal with SuperShuttle included the purchase of three vehicles, some shop equipment at the Harmony location and access to the former competitor's customers.

Although SuperShuttle wouldn't share customer information with Green Ride because of privacy considerations, it will automatically forward website inquiries to Green Ride's site, and its call center will forward calls, Schofield said.

Green Ride moved its headquarters to the Loveland airport in June 2015 after redevelopment of Foothills Mall in Fort Collins and a decision by the Colorado Department of Transportation to limit parking at the Harmony Transfer Center forced it to find a better base of operations.

Schofield said he expects Green Ride to move its headquarters from Loveland to the Harmony site, possibly within a month, but he said the company definitely will keep its park-and-ride, and almost unlimited parking, at the Loveland airport.

The Harmony Transfer Center has long-term parking for only about 50 cars, he said, and Green Ride is looking into options.

"The good news is we're absolutely not going to eliminate or change our direct service in Loveland at all," he said.

His company already had a larger customer base than SuperShuttle did, he said, and he expects business to pick up by 140 percent to 155 percent over last year.

That anticipated increase in customers will allow Green Ride to knock $1 off all its fares, he said.

Schofield said Green Ride determined that it wouldn't be able to handle SuperShuttle's schedule in Greeley, but another company, Greeley Shuttle, is operating there. In Longmont, two companies stepped forward to pick up business in SuperShuttle's wake: Green Ride's Boulder licensee and the new Longmont Shuttle, a service of Longmont-based Eight Black Transport.

SuperShuttle bought out Shamrock Airport Express in 2008, and Schofield and Robert Flynn, both former employees, formed Green Ride the next year.