Food truck sells tacos to Seattle drivers stuck on I-5

CaptionCloseWhen Seattle gives you traffic, sell tacos.A food truck caught in gridlock traffic on Interstate 5 started selling tacos to other drivers on Monday.According to Rachel McQuade, Tacos El Tajin opened up shop while on the roadway, and started selling... 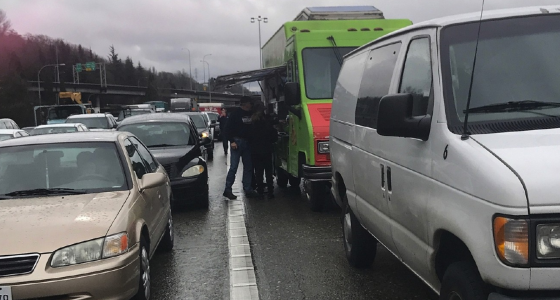 A food truck caught in gridlock traffic on Interstate 5 started selling tacos to other drivers on Monday.

According to Rachel McQuade, Tacos El Tajin opened up shop while on the roadway, and started selling tacos to hungry drivers.

McQuade took video and snapped photos of the unforgettable experience.

Hundreds, if not thousands, of drivers were caught in traffic after a tanker truck overturned around 10 a.m. in the heart of Seattle.

RELATED: Rollover shuts down traffic on I-5, I-90

The crash occurred between a tanker and two other vehicles in the southbound lanes of the I-5 collector-distributor lanes to I-90.

McQuade and her husband were caught in the traffic nightmare when they noticed the bright green food truck open for business. The couple was stuck in traffic for more than three hours before traffic was allowed to exit via the West Seattle Bridge exit.

The surrounding mainline lanes of I-5 and the nearby off-ramps were closed through 6 p.m. for safety while crews tended to the tanker and crash site.