Galleries Videos CONTACT ADVERTISE
Famagusta 23°
few clouds
BUSINESS EDUCATION ENTERTAINMENT HEALTH POLITICS SCIENCE SPORTS TECHNOLOGY
12:08 Guide To Online Sports Betting: How To Choose A Sportsbook
08:28 What Are Some Reasons to Consult a Brain Injury Lawyer?
09:24 Blockchain Solutions for Enterprises: How To Increase Efficiency And Profitability
07:06 How To Deal With A Car Crash In New York
17:43 Tips to keep in mind while choosing the casino site
11:34 Relation Between Employee Theft and Pre-employment Screening Check
04:37 Search your own desired site to play sports for betting
18:00 Top 3 Career Path Options for Business Analysts Preview
15:35 The history of Imen Jane, who is the influencer and the charges on the...
18:48 Sebastian Vettel's Greatest Races
BIST
1124
GOLD
458.727
USD
7.6460
GPB
9.7703
EUR
8.8844
Breaking News
Top 3 Career Path Options for Business Analysts Preview
Close

TAMPA — The Big Blue Machine was in town Monday night.20 Hours Ago2 Weeks Ago2 Weeks AgoIt is never not a show when the University of Connecticut women's basketball dynasty shows up to show everyone else how it is done. Monday, Geno Auriemma and his four-time... 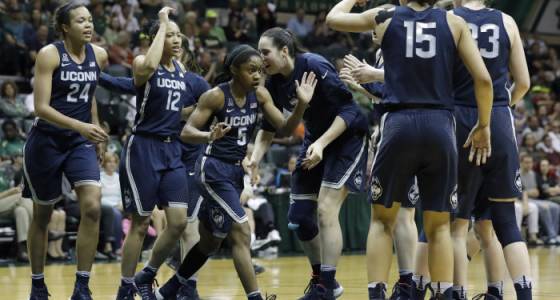 TAMPA — The Big Blue Machine was in town Monday night.

It is never not a show when the University of Connecticut women's basketball dynasty shows up to show everyone else how it is done. Monday, Geno Auriemma and his four-time defending national champions arrived at the Sun Dome with a preposterous, record-setting 103-game win streak. People have given up trying to put it in perspective, Auriemma included.

The USF women, who were scared out of their wits in a 102-37 loss at UConn earlier this season, put on a better fight at home, showed marked improvement — and lost by 28 points.

Make it 104 games. USF has lost to UConn eight times during the 104. USF is 0-22 all-time against UConn. We should have known the Bulls were in real trouble this time around when Geno made sure all his kids were on the plane before it left for Tampa. USF men, take notes.

The Sun Dome crowd was announced at 5,948, easily the largest gathering for USF women or men's basketball this season and just as easily half UConn fans. People ask all the time if the UConn monarchy is good for college basketball.

"I texted (Gonzaga men's coach) Mark Few the other day, and I said you guys are bad for men's college basketball," Auriemma said. "He got a kick out of it. I didn't mean to jinx him. Those suckers lost their next game."

The UConn women are another story.

"It might look easy, but it's not that easy what these kids have done," Auriemma said.

It's good for the game. We wouldn't even be talking about women's college basketball, ever, without UConn. OK, maybe when Baylor coach Kim Mulkey opens her mouth and something idiotic comes out. But mostly we wouldn't care. The UConn women are another story.

You just have to accept that there are two worlds. There is the world of women's college basketball that is wildly competitive. "There's much more parity, that's for sure," USF coach Jose Fernandez said. Then there is UConn's world. There is the Big Blue Machine.

Two hours before Monday's game, Tony Russo and his wife were setting up a tailgate out of the back of their car.

A tailgate for a women's basketball game in Tampa.

A bus pulled up in front of the arena, Tony walked over to see if it was them – if it was Geno and his juggernaut. It wasn't. He returned deflated.

Tony lives in Spring Hill. He moved down from Michigan. He coached basketball up there – boys basketball.

Tony has seen UConn win in Tampa five times during the win streak, including two games at the 2015 Final Four in Tampa.

"There's nothing wrong with a dynasty," Tony said.

"Obviously, I'm surprised," Auriemma said. "Going in, I never thought we'd be able to get through certainly the early part of the schedule with a group of players who hadn't been tested in that manner before. Who's to say what might have happened if we'd lost that Florida State game, or that Baylor game, and started the season 0-2? Everything might have gone completely sideways. I don't know."

The Machine never goes sideways. It has won 151 of its last 152 games.

What is UConn even chasing at this point?

"That's a good question," Auriemma said. "If you're not careful, you don't celebrate things along the way, because you've got your eyes on the end of the season. If you're not careful, the only thing that matters is winning a national championship. This great stuff that happens along the way, if you're not careful, it gets brushed under the rug. Oh, well, ho-hum, it's just Connecticut winning games again. We just finished a regular season undefeated. It's not a big story, because it has been done so many times. But I think at this point, you hate to say it, with all that we've done this season, it's all going to be determined by what happens the next four weekends."

For the 104th time — this month — Auriemma was asked if all this is good for women's basketball.

"I think a lot more people have paid a little more attention because of what we've done. It has brought more attention and more TV coverage. You try to set a certain standard and you hope that people appreciate it."

Auriemma took a deep breath and let it go.

An hour after Monday's game, the UConn bus, the real one, pulled away from the Sun Dome and eased onto Fowler Avenue.

The Big Blue Machine rolls on.