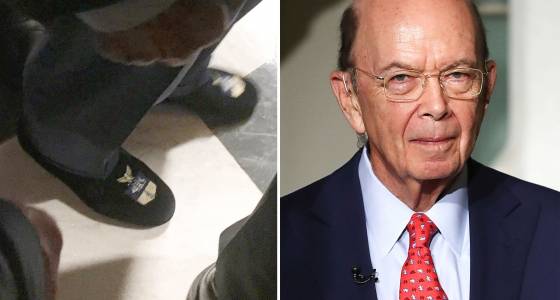 Ross, a billionaire investor, was sporting a pair of slippers from Stubbs & Wooton with the logo of the Commerce Department, according to reports.

The fancy footwear starts at around $495 and a custom-made pair could easily hit $600.

Stubbs & Wooton, with stores in New York and Palm Beach, describes itself on its website as “purveyors of hand made slippers to be worn day into evening, from jeans to dinner clothes.”

Ross’ choice of the pricey house shoes during Trump’s first speech to a joint session of Congress was noticed by reporters who posted pics on Twitter.

“Commerce Secretary Wilbur Ross wore a pair of slippers to Trump’s address, which is a very cute old man thing to do,” wrote Hayley Byrd, an intern with the Independent Journal Review.

Ross, whose worth is estimated at $2.5 billion, was confirmed by the Senate by a 72-27 vote on Monday.

He and his wife own a home in Palm Beach, Fla., not far from Trump’s exclusive Mar-a-Lago resort.