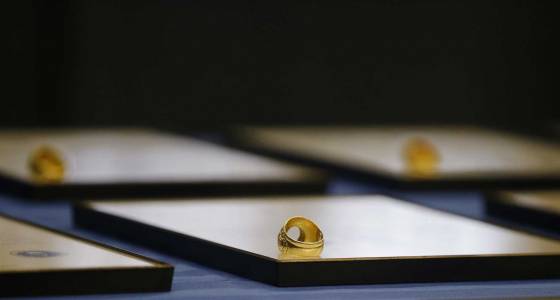 PROVIDENCE, R.I. (AP) — A Rhode Island refinery melted class rings donated by U.S. Military Academy graduates on Monday in an annual tradition, so the gold can be used for new class rings.

The West Point Association of Graduates' Class Ring Memorial Program links its corps of graduates, known as the Long Gray Line, with members joining the ranks.

Forty-one rings were donated this year, most by families in memory of a deceased relative.

During Monday's ceremony at Pease & Curren in Warwick, Rhode Island, the rings were ceremoniously placed into a crucible, and a biography of each donor was read. Many of their families attended.

"A lot of times, families will view this as their final farewell so it's an emotional time," said Cathy Kilner of the West Point Association of Graduates.

One of the rings donated this year belonged to Lt. Gen. James M. Gavin, Class of 1929. Known as Jumpin' Jim, Gavin parachuted into combat four times during World War II, the most of any U.S. general officer, according to West Point.

Kilner said the rings provide a tangible link between the past and the future. Rings donated this year were worn by members of classes ranging from 1924 to 1968.

The gold bar that was made was handed off to a ring manufacturer, Jostens. It will be sent to the company's plant in Owatonna, Minnesota, where the gold will be poured in with an additional 600 ounces of gold. From there, the gold goes to Jostens' plant in Denton, Texas, where the new rings will be made.

In total, 451 rings have now been donated for the program. A small amount of gold is preserved after each melt and used the following year, so new rings have gold from all the rings that have been donated.