Christopher Lloyd goes 'Back to the Future' in Easton (PHOTOS)

For Christopher Lloyd, an actor who has brought life to unique and well-known characters like Reverend Jim, Uncle Fester and Judge Doom, it's another role that will forever cement his legacy in film.  It was in 1985 that pop culture... 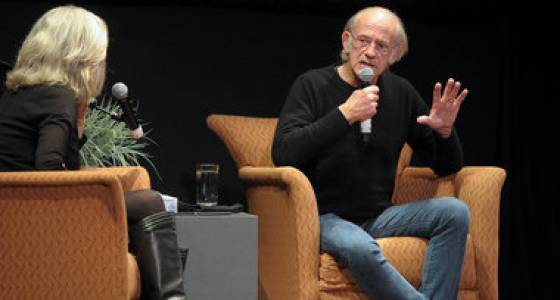 For Christopher Lloyd, an actor who has brought life to unique and well-known characters like Reverend Jim, Uncle Fester and Judge Doom, it's another role that will forever cement his legacy in film.

It was in 1985 that pop culture was introduced to character Emmett "Doc" Brown in the sci-fi smash "Back to the Future," which also starred Michael J. Fox.

Following a screening of the film Saturday night at the State Theatre in Easton, the 78-year-old Lloyd took part in a Q&A session that included audience questions and a closer look at the film and its impact on his life.

Freddy Awards 2017: Show details, dates, how to get tickets

While Lloyd's acting career took a while to get going -- his first film role was in 1975's "One Flew Over the Cuckoo's Nest," released when he was 37 -- it has become a long and successful one.

Lloyd related that one of his favorite roles was playing Uncle Fester in the 1991 movie "The Addams Family." He recalled a fascination with the original comic created by American cartoonist Charles Addams in his youth and never dreamed he would be able to be a part of the story coming to the silver screen.

It is still Lloyd's part in the iconic "Back to the Future" series that gets the greatest reception from people he continues to meet each day, he said in the question-and-answer session with theater President and CEO Shelley Brown. Some folks have even said they were inspired to pursue science and engineering careers based on their love of the film, he said.

And it's now those fans who had fallen in love with the time-traveling "Doc" Brown that are exposing their children to the films that will ensure that Lloyd and the character will surely last well into the future.